Seeds of Colonialism, a solo exhibition of silk-screened posters by Associate Professor in Drawing, Darice Polo, will be on view at Some Time Gallery at 2882 W. 32nd St in Cleveland from January 6 – January 28. 2017. The exhibition opens on Friday, January 6, 2017 from 5 – 8 pm. The posters were printed in collaboration with Ping Pong Press. 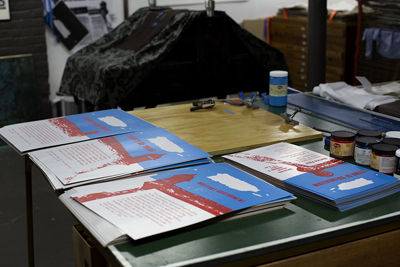 This body of work is a series of statements made by US government officials following the takeover of Puerto Rico in 1898 at the conclusion of the Spanish-American War. It is especially poignant at this moment in US history when viewed under the context of the current US President-Elect’s use of denigrating and intimidating language in support of his immigration policy.

Seeds of Colonialism is a community-based project meant to engage the Puerto Rican community and bring awareness to the greater Cleveland community of the origins of Puerto Rico’s relationship with the US. Visitors to the gallery will be invited to anonymously comment on these statements at the opening of the exhibition and throughout the month of January to be presented to the public at the exhibition’s closing on January 28, 2017.