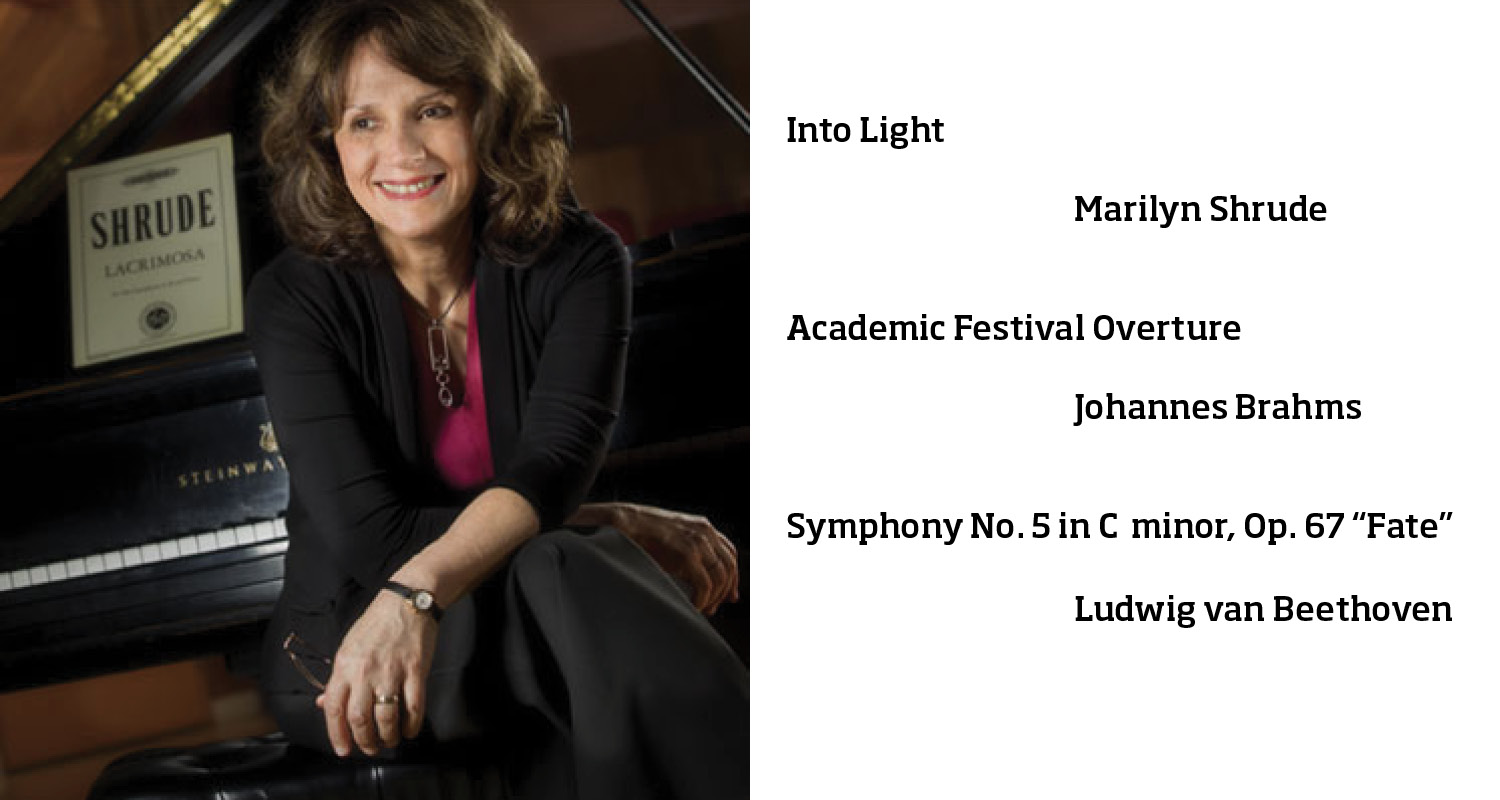 In its third subscription series concert of the season, the Kent State University Orchestra, under the direction of Katherine Kilburn, will present a concert ranging from light-hearted fun to triumph over fate. The concert will open with Marilyn Shrude’s shimmering “Into Light,”originally commissioned and performed by Henry Charles Smith and the World Youth Symphony Orchestra of Interlochen. The composer will be in attendance. Johannes Brahms’ celebratory and humourous “Academic Festival Overture” is next on the program. Bringing the concert to a triumphant conclusion, the audience will be treated to one of Ludwig van Beethoven’s most popular works, the Symphony No. 5, Op. 67 in C minor subtitled “Fate.”

Winner of the Kennedy Center Friedheim Award for Orchestral Music and the Cleveland Art Prize for Music, composer Marilyn Shrude is a Distinguished Artist Professor in the Bowling Green State University College of Musical Arts. A proponent and advocate of contemporary American music, she founded the MidAmerican Center of Contemporary Music and was its director from 1987-1999. She was also the chair of the Musicology, Composion and Theory Department at Bowling Green from 1998-2011. Her compositions are known to be warm and lyrical with a complex blend of tonality and atonality resulting in a rich soundscape that is both powerful and fragile. Her music is widely recorded and she has collaborated with musicians from around the the world including those from the Chamber Music Society of Lincoln Center.

Tickets for the performance are $15 for adults, $13 for seniors and Kent State University faculty and staff, $10 for groups of 10 or more patrons, $8 for non Kent State students who are not eligible for the Fee for Free and free for full-time Kent Campus undergraduate students. Also, thanks to a generous donation from a long-time supporter and patron of the Hugh A. Glauser School of Music, anyone 18 and under can attend the concerts for free, although a ticket must be reserved.

The Cartwright Hall Box Office will open one hour prior to the performance for walk up sales, however, we encourage patrons to purchase tickets in advance to avoid long lines. Tickets and more information are available by calling 330-672-ARTS (2787). You may purchase adult and senior tickets online by visiting www.kent.edu/music/buy-tickets.