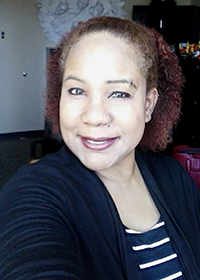 Dr. D. Amy-Rose Forbes-Erickson joins DPAS as the Director of the African Community Theatre and Assistant Professor.  She is a Jamaican born and raised theatre director, designer, scholar. Her expertise is in Pan-African theatre including African American, Caribbean, and African theatres and performances. She received a PhD in Theatre: Performance as Public Practice with a Doctoral Portfolio in African and African American Studies from the University of Texas at Austin. She holds a MA in Theatre from the University of Kentucky, Lexington; a BA (Hons) degree in Theatre Design from Central Saint Martins College of Art and Design in London, England; and a Diploma in Sculpture from the Edna Manley College of the Visual and Performing Arts in Kingston, Jamaica, 1990. She has worked across various disciplines in the visual arts and theatre practice, and has exhibited and designed for theatre in England, the Czech Republic, Canada, the Caribbean, and the United States. Selected designed productions include ‘Biyi Bandele’s Oroonoko, Wole Soyinka’s Death and The King’s Horseman, and Derek Walcott’s Dream on Monkey Mountain. She has directed theatre productions in Austin, Texas, Lexington, Kentucky and London, England including excerpts from Peter Handke’s Kaspar, Mac Wellman’s Mister Original Bugg and Ian Breakwell’s Six to Eight.