Welsh will present lecture and workshop on African dance

Welsh will present lecture and workshop on African dance 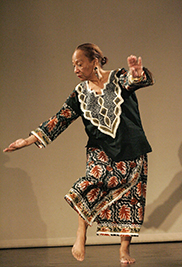 Kariamu Welsh, D.A., noted African dance choreographer and scholar, will visit Kent State University on Sept. 26 and present a lecture titled “African Dance in America: Protest Identity and Continuity” from noon to 1 p.m. in Room D022 in the Center for the Performing Arts. Welsh’s visit is made possible through a partnership between Kent State’s School of Theatre and Dance and the Department of Pan-African Studies.

Following the lecture, Welsh will present a workshop titled “Let the Circle be Unbroken: African Dance and the Umfundalai Technique” from 1:15 p.m. to 2:45 p.m. in dance studio D123 in the Roe Green Center of the Center for the Performing Arts.

Welsh is a choreographer and professor in the dance department in the Boyer College of Music and Dance at Temple University in Philadelphia, Pennsylvania. She received her Doctor of Arts from New York University and her M.A.H. from the State University of New York at Buffalo.

Widely published in both scholarly journals and book-length studies, Welsh is a scholar of cultural studies, including performance and culture within Africa and the African Diaspora.

She is the author of several books including Zimbabwe Dance: Rhythmic Forces, Ancestral Voices, An Aesthetic Analysis, and she is the editor of The African Aesthetic: Keeper of Traditions and African Dance: An Artistic, Historical and Philosophical Inquiry.

Welsh is the recipient of numerous fellowships, grants and awards including a National Endowment for the Arts Choreography Fellowship, a Pew Fellowship, a Simon Guggenheim Fellowship, a Pennsylvania Council on the Arts grant and a Senior Fulbright Scholar Award.

Welsh and collaborators Nnenna Freelon and Maya Freelon Asante received a National Performance Network grant, New England Foundation for the Arts and an National Endowment for the Arts grant to create an evening-length work called “The Clothesline Muse.” The work premiered in March in Philadelphia and will tour in 2015. Currently, Welsh is researching the Afro-Colombian dances of Colombia’s Cali and Cartagena regions.