Final Blog Post for Segment I of Suriname Fulbright Grant

Final blog post for Segment I of my Fulbright Grant to Suriname (October 31, 2017)

Many thanks to my hosts at Anton de Kom University for providing space to work and sharing their expertise on a wide range of topics.  Dr. Paul Ouboter, head of the zoological collection, is my official sponsor; Sheryl Stark and Aniel Gangadin graciously shared office space with me during the month of October.

Sheryl Stark (right) is an MSc student in Environmental and Conservation Biology. Sheryl is researching the bushmeat trade in large and small markets in Paramaribo. In collaboration with Wilma (left), she manages the library of the National Zoological Collection of Suriname.

Aniel Gangadin is also a graduate student in the MSc program studying fruit fly diversity at two sites in central Suriname. He is the Assistant Curator for Invertebrates at the National Zoological Collection and Center for Environmental Research.  Aniel and Sheryl were two of my students in a graduate course I taught in Suriname last year on Plant-Animal Interactions. 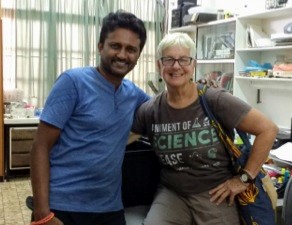 While in Suriname, I spent three weekend days at the Sloth Wellness Center in a forest in the Saramacca district, conceived and constructed by funds raised by Monique Pool and her non-profit organization. The Center consists of six steel shipping containers connected with rafters supporting a high roof and an observation deck in the front and rear—energized by solar power. I met Monique (in white in the picture below) during the 2008 Association for Tropical Biology and Conservation meeting in Paramaribo. She has come a long way since the days when her home served as the rehab center. As head of the non-profit Green Heritage Fund, she has raised awareness of xenarthran (sloth and anteater) losses when forests are cut down, in the process becoming an expert on sloth and anteater husbandry.

While I was in Suriname, at least seven 3-toed sloths were rescued and released within 24 hours. Two giant anteaters, destined to be exported to Asia, were rescued from the live trade. One died shortly after it arrived at the Center; the other was healing well from rope wounds around its torso – but needed to have a fresh termite mound to feed from every day! In addition to the sloths that can be released quickly, the Center cares for very young sloths and those that have been injured, most commonly by humans cutting their claws to make them “better pets.” This quick fix is devastating for their mobility since their claws grow back very slowly. Monique believes that they can learn to reuse muscles and tendons in the hand and arm – but that too takes time, requiring learning new ways to maneuver in trees, before they can be released. It was a pleasure to feed three young sloths goat’s milk from a pipette and “smoothies” of fresh Cecropia leaves; the two youngest sloths still sleep in an incubator at night. 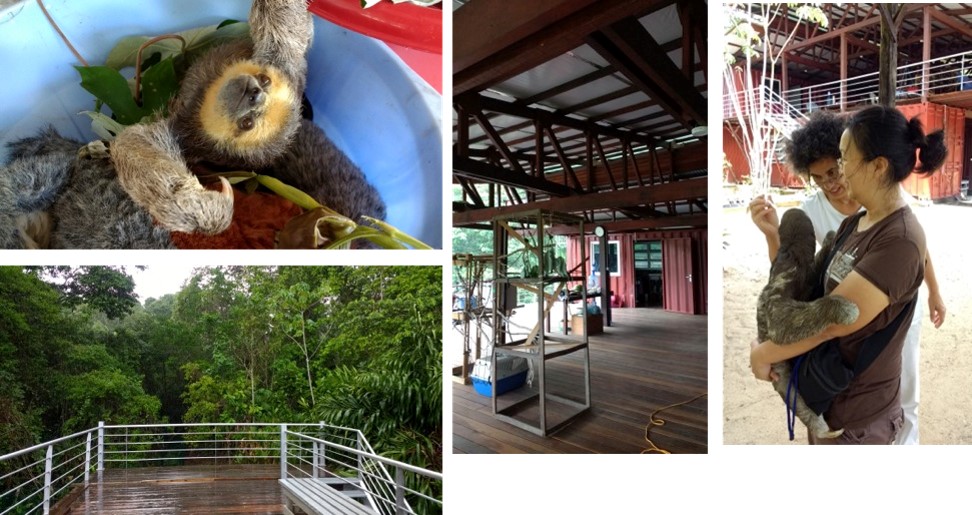 Since 2005, Monique has also been involved in protecting dolphins in the estuary of the Suriname River. In past years as well as this one, I have spent several wonderful hours on the river watching as her volunteers collect water chemistry data and observe dolphins feeding and traveling in the Suriname River to its mouth at the Atlantic Ocean (below).

On this launch, Monique (center) talks to a reporter and photographers from Deutsche Welle radio about conservation efforts on the Suriname River. 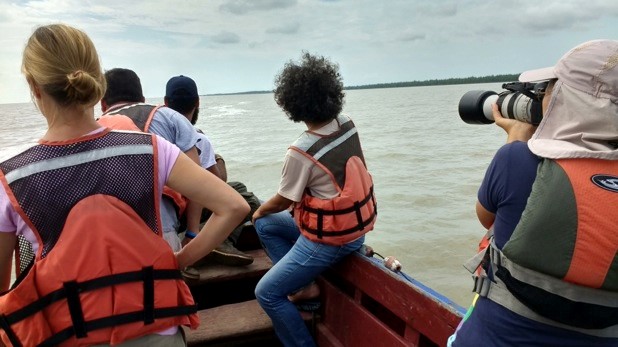 The city of Paramaribo is vibrant and ever changing, a mixture of Dutch buildings built in the 16th-19th centuries and new construction that reflects a diverse population. Another expression of that diversity is incredible food! While I was in Suriname, the city celebrated Maroon Day to mark the emancipation of Africans enslaved in past centuries, and Diwali, the Hindu Festival of Lights. 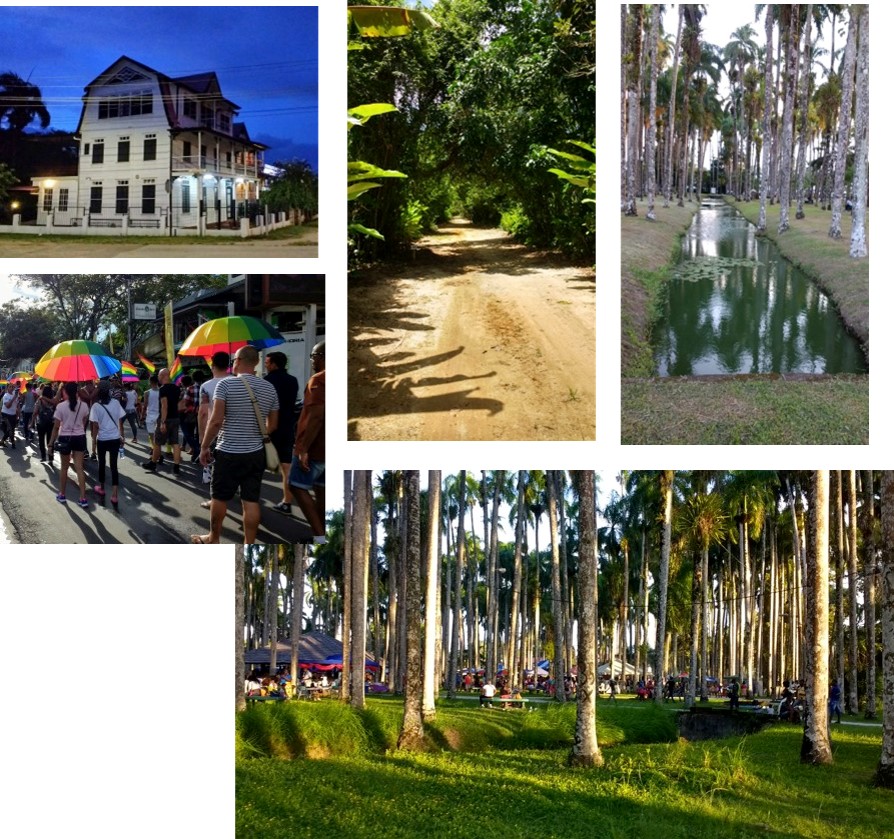 Back to work – in the last two weeks of my residence, I gave research talks to Conservation International, the Forestry Service (Landsbeheer Suriname), and was invited by an old friend to talk to the United Tour Guides of Suriname about the monkeys inhabiting the coast and interior of Suriname. Ari, Chantal and I had one final meeting with former workshop students from 2013-2017 at Chi-Min, a well-known Chinese restaurant.

A meeting with Dr. Max Huisden, head of the Environmental Sciences Department at Anton de Kom University, and Dr. Sheila Marhé, Science and Policy Director at Conservation International, Suriname, resulted in a proposed conservation module to be taught when I return in February. In addition, botanists from the National Herbarium of Suriname and I plan to collaborate on a project at Brownsberg Nature Park in March – on the next leg of the Fulbright.