Dr. C. Owen Lovejoy received the President's Medal from President Beverly Warren at the May 13th commencement ceremony. This is the highest honor conferred by Kent State University and is in recognition of outstanding  and extraordinary contributions. See more-  Additional coverage here. 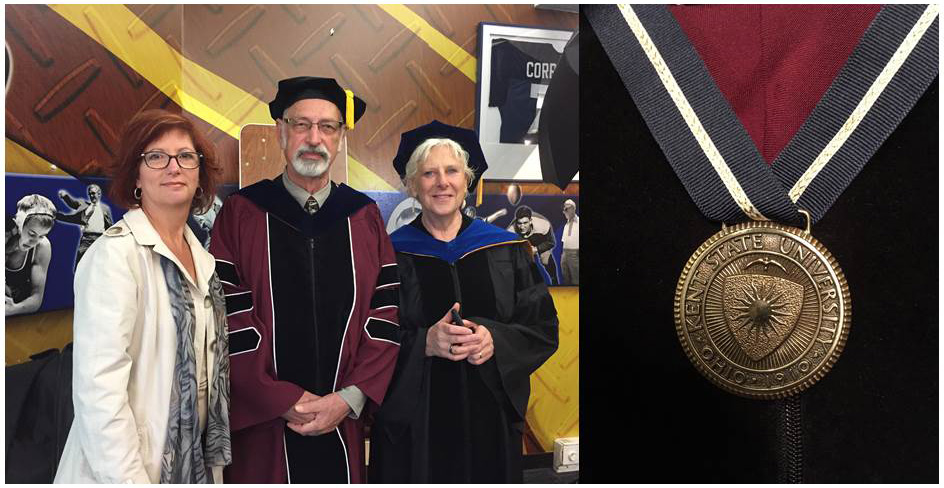 Dr. Lovejoy joined the faculty of Kent State University in 1968 as a ‘Temporary Instructor’ (the lowest possible rank for a faculty member). He performed sufficiently well during the next two years to be promoted to Assistant Professor in 1970. In 1989, Dr. Lovejoy was promoted to University Professor and became the Distinguished Professor of Human Evolutionary Studies in 2013 (his current rank).

Dr. Lovejoy’s research interests include human origins modeling, developmental biology, biomechanics, paleontology, and forensic medicine. Although his interests are diverse, Dr. Lovejoy has made important and transformative contributions to each of these fields.

Dr. Lovejoy was elected to the National Academy of Sciences (NAS) in 2007 and is the only NAS member here at Kent State (and the only NAS member in the Mid-American conference). He served as the Elected Chair of Section 51 (Anthropology) for the NAS from 2013-2016 and has been on the Editorial Board Member of the Proceedings of the National Academy of Sciences since 2009. Dr. Lovejoy was also elected to the American Academy of Arts and Sciences in 2014 and is a Fellow of the American Association for the Advancement of Science.

Amongst his numerous other recognitions, accomplishments, and awards, he is the ‘ISI Most Highly Cited’ researcher in the Social Sciences with an h-index of 45. He has more than 160 publications in peer-reviewed journals, one textbook, and too many abstracts to count. He was an author on 8/11 articles (first author on 5, sole author of one) in a Special Issue of Science dedicated to Ardipithecus in 2009. A Special Issue of Science was unprecedented at that time. The lead article in that issue is now identified as ‘Highly Cited’ by ISI and has received enough citations to place it in the top 1% of its academic field. Ardipithecus was declared the Breakthrough of the Year by the editors of Science (18 December 2009- beating out the discovery of water on the moon) and “Ranks first in top 10 Science Breakthroughs of the Year” by Time. In addition, there have been numerous television shows and documentaries, including Discover Channel’s special on Ardipithecus and several other shows that covered topics including Lucy (Australopithecus afarensis) and forensic anthropology. Dr. Lovejoy conducted a complete restoration of Lucy in National Geographic and was the first to realize that her bipedality was sophisticated and advanced (in the 1970s).

Dr. Lovejoy has served as a forensic anthropologist across the United States (California, New Jersey, Michigan, Illinois, Ohio, Florida, etc.). Dr. Lovejoy and colleagues discovered that the auricular surface of the hip bone is the best single indicator of adult age in the skeleton. This is now the gold standard for aging skeletons (and was even featured on the television show CSI).

In addition to being a world-renowned scientist, Dr. Lovejoy is a valued colleague, a generous university citizen that serves cheerfully in any capacity asked of him, and a master lecturer and teacher. His service on committees on all levels (university, departmental, honor’s thesis, Master’s thesis, and Doctoral dissertation) is astounding. He has also received numerous awards for excellence in teaching and mentorship (from being awarded Outstanding Teacher in 1972 to Outstanding Mentor Award in 2008). He was primary advisor for many of the 30+ graduates of the Biological Anthropology PhD program (through the School of Biomedical Sciences) and was instrumental to the success of each one.

Dr. Lovejoy will enter his 50th year of service to Kent State University in 2018.  His contributions on all levels (teaching, advising, citizenship, scholarship and research) continue to be at the highest level and he is a leader in every capacity. His model for human origins that includes social monogamy with males provisioning females in order to decrease inter-birth intervals has stood the test of time. He was ahead of his time (and technology) when he initially proposed this hypothesis in 1981. Since that time, we’ve made significant advances in understanding the genetic, physiological, and neuroanatomical underpinnings of the human condition. Every new line of evidence contributes to and supports Lovejoy’s unique vision. Visionaries that revolutionize our views of who we are and where we come from are rare, and the impacts of their contributions have lasting and tremendous impact. Lovejoy is one of these visionaries. He re-shaped our understanding of human evolution with his contributions to Lucy in the 1970s, then again with his then-controversial model of human origins, then again with Ardi in 2009, and he continues to re-shape our views of how our species evolved. Stay tuned- Dr. Lovejoy is nowhere near finished revolutionizing our understanding of what it means to be human.