New York-based artist Tania Bruguera will deliver a lecture at noon Friday, April 1, in the Center for the Visual Arts, room 165.

Tania Bruguera is a politically motivated installation and performance artist who explores the relationship between art, activism and social change in works that examine the societal effects of political and economic power. According to art21.org, the Cuban-born artist self-identifies as an initiator rather than an author. Bruguera’s performances often require audience participation and interactions, adding to the conversation surrounding the politics of repression and control. Through her art, Bruguera proposes solutions to sociopolitical problems and has developed several long-term projects, including a school for behavior art. Bruguera attended art schools in Havana, including the Instituto Superior de Arte (1987-92), and received an M.F.A. from the School of the Art Institute of Chicago (2001). She received a Guggenheim Foundation fellowship (1998), and has been awarded residencies at Skowhegan (2002); Headlands Centers for the Arts (1998); Fundación Museo de Arte Contemporáneo de Maracay (1998); Art in General (1997); and ART/OMI (1995). Major exhibitions of her work have appeared at the Van Abbemuseum (2014), Queens Museum (2013) and many others. To learn more about Tania Bruguera, visit www.taniabruguera.com.

Image: Tania Bruguera, "An Object for TH - 'Disciplinated Trust,'" mail art, January 2009 - January 2010. Materials: "Weekly correspondence during one year, ban to the receiver or any other person other than Tania Bruguera to open the letters, knife, red wax, seal, engraved acrylic box." 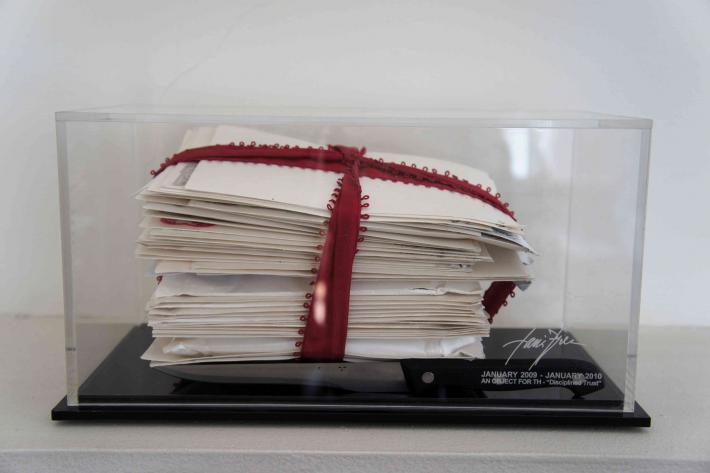