Visiting Artist for Kent Blossom Art, Michael Radyk will speak on his work.

Michael Radyk is an artist and designer whose wall pieces, work and textiles have been exhibited both nationally and internationally. He has been awarded  residencies from the Hambidge Center for Creative Arts & Sciences in Rabun Gap, Georgia and the Oregon College of Art and Craft in Portland, Oregon.  Michael has also received a Ruth and Harold Chenven Foundation Grant and awarded the Presidents Prize at the exhibition FOCUS:Fiber 2014, held at the Erie Art Museum and sponsored by the Textile Art Alliance, Cleveland Museum of Art. .

His past exhibitions include Binary Fiction; Digital Weaving at the Eisentrager-Howard Gallery, University of Nebraska, New Weave: Five Contemporary Weavers at the Common Wealth Gallery, University of Wisconsin, Madison, Fibremen 1 &4  International at the Kherson Local Lure Museum in Kherson, Ukraine and the Artist in Residence Exhibition at the Hoffman Gallery in Portland, Oregon.

Selected recent exhibitions include; International TECHstyle Art Biennial, 2014, San Jose Museum of Quilts and Textiles, Small Expressions 2014, Fulller Craft Museum and Focus:Fiber 2014, Erie Art Museum and a solo exhibition of his 05 Series at the McLanahan Gallery in the Misciagna Center at Penn State University. Michael is Professor and area head of the Textiles and Crafts at Kutztown University of Pennsylvania.

In 2015 Michael's work will be included in the exhibition Influence and Evolution: Fiber Sculpture then and now at browngrotta arts, Wilton, Connecticut.

Artist Talk - Faisal Abdu'Allah
TMI: Giving an Account of a Trans Self
END_OF_DOCUMENT_TOKEN_TO_BE_REPLACED 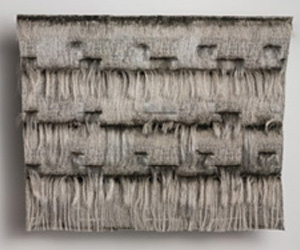