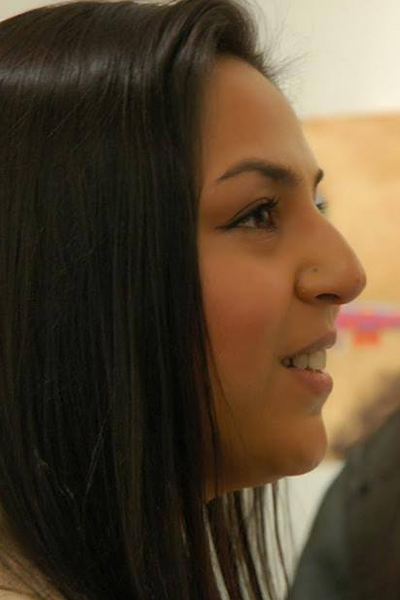 Mahwish Chishty, Assistant Professor in Foundations, is a new faculty member who we are proud to welcome to the School of Art.  She was also awarded a 2017 Guggenheim Fellowship.  Chishty is showing her work in a solo exhibition at the Imperial War Museum in London through Mar. 19, 2017.  We interviewed her about her background and current exhibition.

Please give us a brief overview of your training and art background.
I grew up in Saudi Arabia where I had no formal art training. Fortunately, we visited Pakistan often as a family where I was introduced to different forms of art. Soon after, I knew I wanted to be a visual artist but when I learned that National College of Arts in Pakistan is the only institute that gives a bachelor’s degree in Miniature painting. I also learned that through that training, I would learn to make my own paper, paints and brush from squirrel tail hair and that's when I knew that I really wanted to be a Miniature painter. I was fortunate enough to come to US and earn a master’s degree in Studio Arts from University of Maryland which balanced my traditional background.

Can you explain the concept of your work currently at the Imperial War Museum?
I began working on 'Drone art' series after my visit to Pakistan in 2011, just few months after the peak year of CIA conducted drone strikes at the border of Pakistan and Afghanistan. My solo exhibition at Imperial War Museum in London displays a wide array of works from 2011 to 2016 and gives an overview of how this project has evolved over time from flat to sculptural paintings and later into three-dimensional objects. I am interested in maintaining the complexity of modern warfare in a visual form without giving away a precise personal opinion. These paintings depict silhouettes of military drones in a colorful folk tradition of 'truck art' to give them a second skin; colliding cultural beauty with the image of terror.

'Truck art' has recently become a cultural phenomenon in Pakistan. In this practice trucks are painted inside and out, in elaborate colors. Truck drivers use their mode of transportation as a form of self-expression; drone operators, however, are invested in remaining anonymous. Through this project, I hope to open up a conversation about omnipresent of 'truck art' and the not-so-visible presence of drones in that region and in mainstream media.

How is this exhibition significant to your career?
This is my first solo show in Great Britain and I'm thrilled to be invited to share my work in a city that is so diverse. The most useful aspect of this invitation was when I had informal conversations with people who came to see the work at the opening and later attended my talk 'Covert War and Colliding Cultures'. I have heard from people in Pakistan and US on what they know about the drone program but it was interesting to hear what British citizens thought or knew regarding this situation. I am extremely thankful to Imperial War Museum staff for facilitating this discussion.

What unique perspectives do you think you bring to Kent State?
This is my second semester at KSU as a Foundations instructor and I am so excited to see students’ enthusiasm towards learning and contributing to their community. As an artist trained in the East and West, I understand the importance of both and practice balancing traditional and contemporary practices in my teaching. I encourage young artists to use visual art language to communicate issues that are of high importance to them. I believe that we need it in our lives more than ever before.