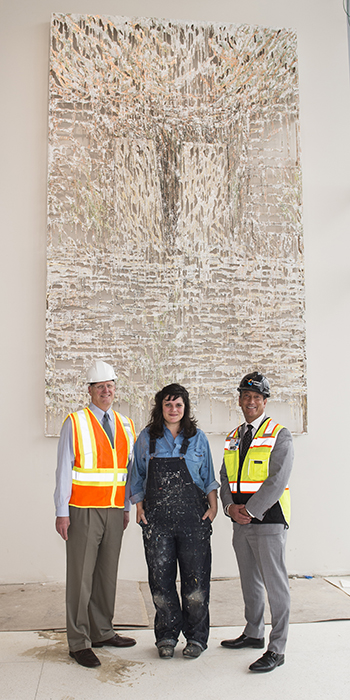 Twelve Kent State University School of Art alumni and one faculty member have been selected for acquisitions and commissions for the art collection located at Summa Health System’s new patient tower in Akron.  According to Summa’s website, the new patient tower on the Summa Health System - Akron Campus embraces Summa's commitment to promoting a healthcare environment that surrounds and connects patients, visitors and staff with the healing powers of the arts.  The building has over 50 artworks displayed throughout, created by 41 different artists, all with connections to Northeast Ohio.

Alumna Diana Al-Hadid was awarded a commission for the main lobby of the new building via a juried competition open to artists with an Ohio connection.  Al-Hadid, who grew up in Canton, was inspired by the opportunity to celebrate the natural and man-made environments of Akron.  The commission artwork, a large, mixed-media 3-D “painting” called “A Way with Words” is based on a photo she took in Lock 3, a section of the Ohio and Erie Canalway, located in the heart of Akron’s downtown. Read more about her process and watch a video interview with the artist on Summa’s website.

Don Drumm, Kent State alumnus and an icon of the Akron art community, has three artworks located throughout the campus.  His large-scale metal sculptures, including one that is two stories high, can be found in the Dr. Gary B. and Pamela S. Williams Center for Breast Health and in the Jean and Milton Cooper Pavilion in ground floor lobby.

There will be a community grand opening celebration on Sunday, May 19 from 11 a.m. – 3 p.m.  Learn more about the collection and the artists on their website.