Professors Lori Kella (Photography) and Mark Schatz (Foundations) have an exhibition called Vignettes on view at the Sally Otto Art Gallery at the University of Mount Union.  The reception is on Thursday, November 9 from 4-6 p.m. and the exhibition will be on view through December 10, 2017.  The Sally Otto Art Gallery is located at the Giese Center for the Performing Arts, University of Mount Union, 1972 Clark Ave, Alliance, Ohio 44601. 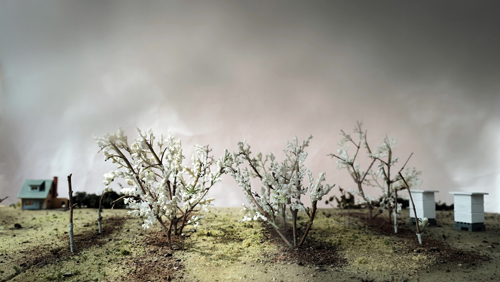 Lori Kella's photographs were initially inspired by a drive to Michigan on March 11, 2016, the fifth anniversary of the Tohoku earthquake and tsunami.  These constructed photographs recreate images from Kella’s initial drive and offer a glance at the expansive landscapes of the Midwest, as well as fragments of fleeting moments along the way.  These images are coupled with flashes from news headlines, remembrances from the tsunami, and speculations on what else might be lost especially as our planet enters a new era of global climate shifts.  The collection of photographs fuses the beauty of Kella’s birthplace, with the anxieties of what might disappear from the natural world in the decades ahead.

Mark Schatz's work in Vignettes reflects his ongoing interest in allowing “finished” works of art, rejected experiments, and cast-off materials to continue to evolve in the studio, sometimes over years. Work is refined, reassembled, and reimagined in the same way that the geography that inspires this work undergoes constant change.

While some of the pieces included in “Vignettes” are invented step by step, layer by layer, resulting in a familiar but fictional landscape, the most gestural and painterly pieces are also the most rigidly precise. The expressive, seemingly-abstract prints on fabric are actually derived from carefully constructed landscapes built painstakingly by hand from USGS (United States Geological Society) topographical maps. The areas represented in the maps include towns, nature preserves, and neighborhoods built along a shifting river basin in areas around Houston, Texas, a landscape prone to extremes.

These monumental topographical models have been under development and in and out of storage in Schatz's studio for nearly a decade while they were worked and reworked repeatedly. It seems serendipitous that this record of how the tremendous force of flowing and flooding waters have carved and transformed the flat Texas landscape finally came to fruition at the moment that Hurricane Harvey made landfall and buried the city of Houston under record breaking levels of rainfall, transforming the landscape again.