Richard Anuszkiewicz was a meticulous painter who was a pioneer of the Op-Art movement in the 1960s. He was a graduate of Cleveland Institute of Art, earned his MFA from Yale University and returned to Ohio to attend Kent State, earning a degree in education while honing his painting skills.

Anuszkiewicz was the first visiting artist for Kent State University’s Kent Blossom Art Intensives in 1968, a summer visual arts program that brings talented visiting artists to campus annually to work with students. The School of Art Collection acquired three serigraphs by the artist in 2005 titled “Two Portals: Homage to the Twin Towers” (pictured above).

Anuszkiewicz died in his home in Englewood, New Jersey on May 19, 2020, just four days before his 90th birthday. 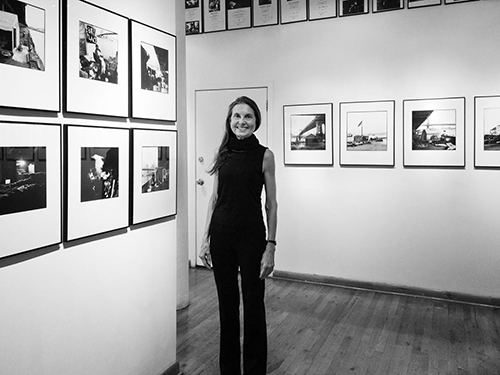 Alumna and Akron native Margaret Morton (BFA '70) was known for her documentary photographs of people experiencing homelessness and their ingenuity. She was also a long-time professor at The Cooper Union School of Art.

From the Cooper Union obituary: In 1989, Morton began documenting the improvised housing created by people living in Manhattan’s Tompkins Square Park. In the decades that followed, she built a remarkable record of how people live and survive at the edge of a society that overlooks them. Her photographs have appeared in numerous publications, including The New York Times, The Washington Post, and The Atlantic, and her works have been shown in dozens of solo and group exhibitions. Her books include The Tunnel: The Underground Homeless of New York City (Yale University Press, 1995), Fragile Dwelling (Aperture, 2000), Transitory Gardens, Uprooted Lives (Yale University Press, 1993), and Glass House (Penn State University Press, 2004).