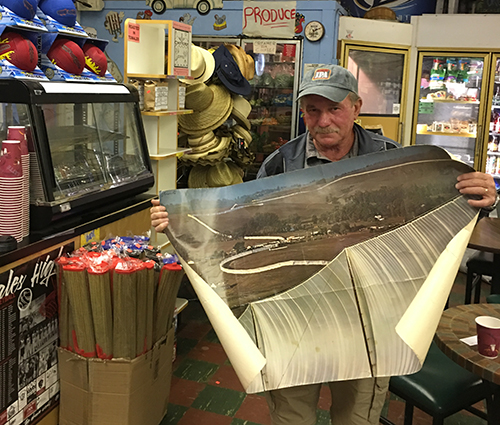 Kent State University School of Art Collection and Galleries has acquired an important piece of art history, thanks to the research of Assistant Professor, Dr. John-Michael Warner. Dr. Warner has been working on a new book focusing on the stories and relationships forged during the creation of Running Fence: A Project for California by well-known land artists Christo and Jeanne-Claude. A section of the fabric measuring 18 feet by 60 feet was recently donated by Beagle Brodsky, a onetime employee at the Running Fence Corporation, a business developed exclusively for the implementation of this project. Brodsky was hired to help install and de-install the fence.

In addition to Dr. Warner’s friendship with Brodsky, his relationships with the Running Fence community, and subsequent oral histories, expand already existing collections at the Smithsonian Museum of American Art, Smithsonian Archive of American Art, University of Arizona Archive of Visual Arts, and the University of California Bancroft Library. According to the Smithsonian Museum of American Art, Running Fence was a culmination of 42 months of collaborative efforts, was 24 ½ miles long and 18 feet high, with one end dropping down to the Pacific Ocean. This monumental temporary artwork was made of 240,000 square yards of heavy woven white nylon fabric, 90 miles of steel cable, 2,050 steel poles, 350,000 hooks, and 13,000 earth anchors. Paid for entirely by Christo and Jeanne-Claude, the completed project existed for only two weeks in September of 1976.  Although Running Fence was installed in Marin and Sonoma Counties in California, it has local roots. The temporary barrier was made of surplus fabric purchased from General Motors and sewn in a factory in West Virginia.

Brodsky’s gift of a monumental-scale section of Running Fence is an important addition to the School of Art Collection that contributes to the strength of the history of land art at Kent State University.  Most notably, Kent State is the site of one of Robert Smithson’s first land artworks, Partially Buried Woodshed from 1970.  As is the case with all of the artworks and objects in the School of Art Collection, classes and scholars are able to request to study the Running Fence panel for research purposes.  The collection holds over 4,000 objects and is housed in an open storage facility at the Center for the Visual Arts.

Images: Top photo by Jeanne-Claude © 1976 Christo.  Within text: Photo of Beagle Brodsky holding a poster of an image of "Running Fence" taken by John-Michael Warner.