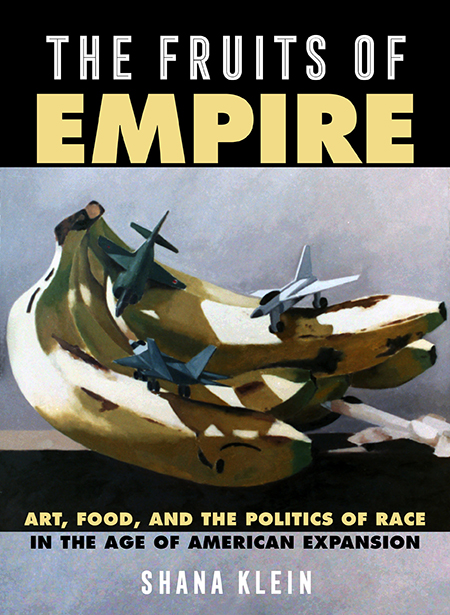 Shana Klein, Ph.D., assistant professor of art history, has released her new book “Fruits of Empire: Art, Food, and the Politics of Race in the Age of American Expansion," which is available for purchase starting Oct. 13, 2020, on the University of California Press website.

"The Fruits of Empire" is a history of American expansion through the lens of art and food. In the decades after the Civil War, Americans consumed an unprecedented amount of fruit as it grew more accessible with advancements in refrigeration and transportation technologies. This excitement for fruit manifested in an explosion of fruit imagery within still life paintings, prints, trade cards, and more. Images of fruit labor and consumption by immigrants and people of color also gained visibility, merging alongside the efforts of expansionists to assimilate land and, in some cases, people into the national body. Divided into five chapters on visual images of the grape, orange, watermelon, banana and pineapple, this book demonstrates how representations of fruit struck the nerve of the nation’s most heated debates over land, race and citizenship in the age of high imperialism.

Klein was recently invited to be on the podcast "Gastropod," a biweekly series that looks at food through the lens of science and history. Klein was interviewed for the Aug. 3 episode, “The Most Dangerous Fruit in America,” where she spoke about the racist history of watermelon. Many Americans think of the fruit as a refreshing summertime treat, “but the fruit's history has often been the opposite of sweet: Watermelons have featured in some of the most ubiquitous anti-Black imagery in U.S. history. So how did the watermelon become the most dangerous—and racist—fruit in America?”

Listen to the podcast on its website or via your favorite podcast app.

About Shana Klein: Shana Klein is an art historian trained in the history of American art, with sub-specialties in African American and Native American art. She holds a Ph.D. in Art History from the University of New Mexico, where she completed the dissertation—and now book—“The Fruits of Empire: Art, Food, and the Politics of Race in the Age of American Expansion.” Klein has been awarded several fellowships for her research at the Smithsonian American Art Museum, United States Capitol Building, Huntington Library, Henry Luce Foundation, Georgia O’Keeffe Museum, among others. She has published research in journals such as American Art, Public Art Dialogue, Southern Cultures, and more. Her explorations of art, food, and racism have also been featured on a number of digital publications and podcasts. Klein’s research interests include: American visual and material culture, food studies, race and post-colonial studies, and art and social justice.

Images: (top) A still life of watermelon on a silver platter, by Giuseppe Recco (1634–1695); portrait of Shana Klein. (right) Cover of the book, The Fruits of Empire.