Two MFA Textiles alumni are being featured in the Sculpture Center’s new exhibition in Cleveland. Objections and Connections, Fiber Artists Talk Back includes five fiber artists and is on view from September 15 through October 27, 2017.  Recent textiles alumni Trey Gehring (’17) and Kathryn Shinko (’15) are showing their work alongside Penny Mateer, Lauren Davies, and William Marcellus Armstrong.

Objections and Connections, Fiber Artists Talk Back complements and confirms the relevancy of the exceptional artwork of The Nowness of Then: Lilian Tyrrell’s Disaster Blankets. These five fiber and multimedia artists are working with imagery and objects taken directly from the public realm, most from the internet. As Alfredo Jaar recently said of his own work, theirs is a “reaction to reality.” They are addressing issues of the environment, politics now and politics of the past that still impinge upon now, and gay culture. 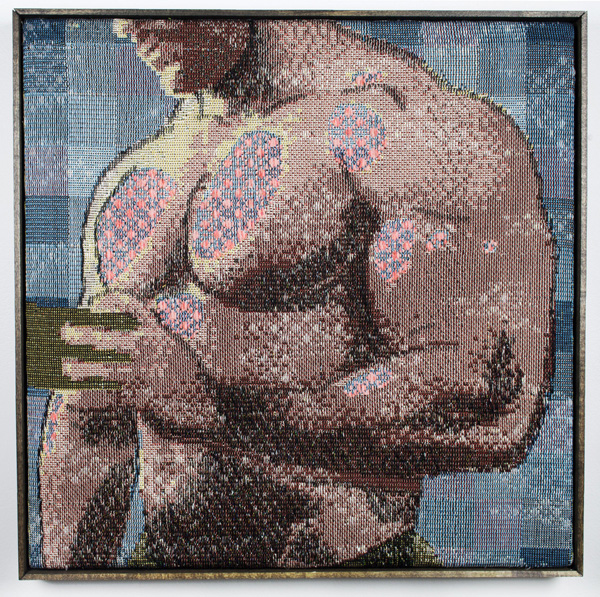 Gehring, for his graduate thesis work, Musclebound, appropriated images that men share of themselves on the social media outlet, Instagram. As a musing upon male dominance, social isolation and anonymous yet personal public display, and body imagery, he presents these formidable male bodies as decorative objects. He creates his fiber art using a commercial Jacquard loom with hand inserted metallic covered threads and a knitting machine. 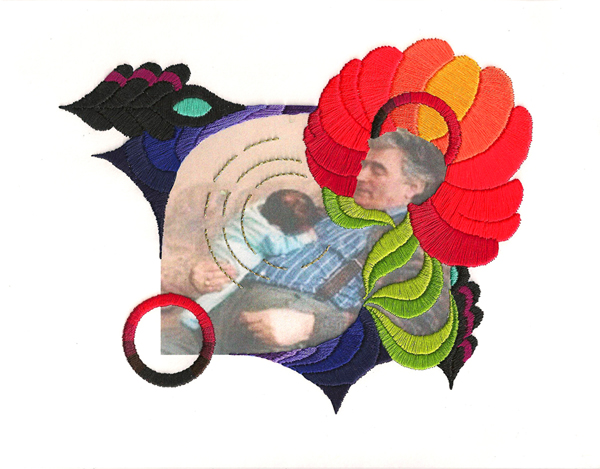 Kathryn Shinko has developed a fiber practice that strongly protests, through visual and verbal irony, the degradation of women and the flagrant injustices of political power, especially in Eastern European, former Soviet countries. Her two series of needlepoint pieces in this exhibition present an ironic and damning perspective of two terrible men of the 2oth century, by her judicious application of needlepoint to well known, internet available photographs of the men and her cynical accompanying descriptions. Reinhard Heydrich, considered by historians to be the most ruthless of the Nazis, is particularly notorious for his treatment of the Czech people and resistance fighters and for his direct coordination of the murder of at least 2 million people in the wake of the German armies’ advances. Radovan Karadzic, former leader of the Bosnian Serbs during the Yugoslavian conflict of the 1990s, was sentenced to 40 years’ imprisonment for genocide in 2016 by the International Criminal Tribunal of the Former Yugoslavia (ICTY), The Hague, The Netherlands.