We the People Returns to Kent State Campus 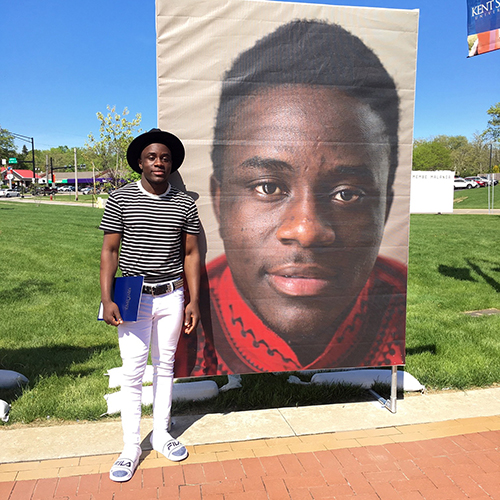 "We the People" returns to Kent State University campus from September 6 - 30, 2019 and will be on view during the College of the Arts' Kent Creativity Festival.  This gives students and the community who may have missed it the first time it was up in May a chance to view the exhibition and learn about local refugees. The exhibit is a series of portraits of Northeast Ohio community members who also identify as refugees. With images by photographer Erin Labelle, this project is organized by the GURI (Global Understanding Research Initiative) group at Kent State University to emphasize our common humanity. Assistant professor of art history Joseph Underwood assisted in organizing this exhibtion, which was on display earlier this summer.

“We the People” includes 25 large scale portraits (84 by 60 inches) displayed along the Esplanade which links the Kent State campus to the city of Kent. This public exhibit makes visible the refugee neighbors who have settled in Northeast Ohio; its goal is to give a platform for their stories and journeys, and to invite many people—regardless of age, origin, language, or education—to learn about the experience of people who have come from other parts of the world to live in this community. This project includes people of different ages, ethnicities, and nationalities, who have settled in Ohio near you. Each portrait is accompanied by a panel that outlines each person’s journey and a message they want to share.  This public exhibition is partly inspired by Italian photographer Luigi Toscano’s “Lest We Forget” traveling exhibition of Holocaust survivor portraits, which started at the Lincoln Memorial Reflecting Pool in Washington D.C. in 2018.

Screening of Manthia Diawara's An Opera of the World

What happens when artistic cultures migrate and meet?

How do migrants navigate between tradition and assimilation?

Screened at Documenta 14, Manthia Diawara's An Opera of the World centers around a staging of Wasis Diop’s Bintu Were, A Sahel Opera, filmed on location in Bamako, Mail in 2007– a pioneering work telling the story of migration from West Africa to Europe by combining traditional Malian music with the structure of the Western operatic art form.

Diawara’s film serves as a mirror to build an aesthetic and reflexive story, through song and dance, about the current and yet timeless drama of migration between North and South, and the ongoing refugee crises. The film ponders on the realities of cultural encounters through the concepts of métissage and hybridity. The success and limits of fusing African and European perspectives are tested by interlacing performances from the Bintou Were opera, past and present archival footage of migrations, classic European arias, and interviews with European and African intellectuals, artists and social activists.

The film will be followed by a short panel discussion with Joseph Underwood (Art History), photographer Tariq Tarey, and two participants from We the People: Eka Anthony and Hsa Win.

Over 65 million people around the world have been forced from their homes to escape famine, climate change and war. The documentary by Chinese activist and artist Ai Weiwei, elucidates both the staggering scale of the refugee crisis and its profoundly personal human impact. Segments from this 2.5 hour documentary  will be shown. Captured over the course of an eventful year in 23 countries, the film follows a chain of urgent human stories that stretches across the globe in countries including Afghanistan, Bangladesh, France, Greece, Germany, Iraq, Israel, Italy, Kenya, Mexico, and Turkey.

The film will be followed by a panel discussion with Dr. Francoise Massardier-Kenney (Co-director of KSU Global Understanding Research Initiative) and Dr. Abdi Shaeye (Assistant Professor of Economics).