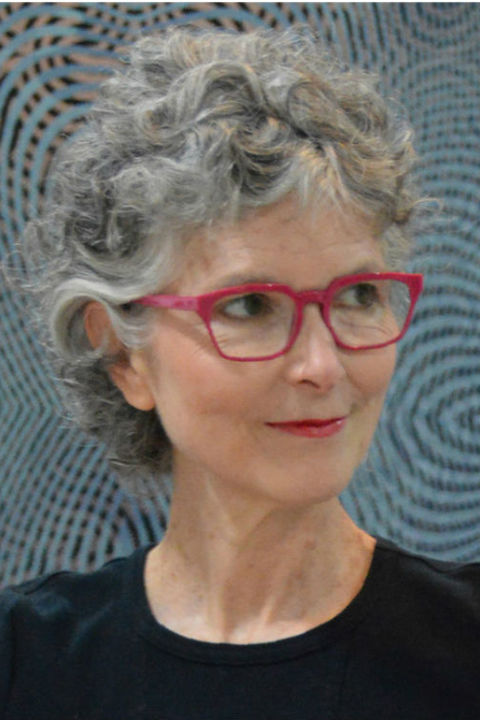 Janice Lessman-Moss, a native of Pittsburgh, Pennsylvania lives in Kent, Ohio, where she is Head of the Textile Art program at Kent State. She received her BFA from the Tyler School of Art, Temple University and her MFA from the University of Michigan. Since beginning her career as a Professor of Textiles in 1981, she has continued to explore all aspects of weaving, combining the ancient craft with the latest digital technologies.  Her woven work been presented throughout the United States and internationally, including solo exhibitions at the Galleria Willa in Lodz, Poland, the Museum of Fine Art and Culture in Las Cruces, New Mexico, the Kent State University Museum, and Praxis Gallery in Cleveland.  Other exhibition highlights include: “Neo Geo,” at the Akron Art Museum; “Let’s Get Digital,” at the Riffe Gallery, Columbus, OH; “Fiberarts International 2013 and 2016,” Society for Contemporary Craft and Pittsburgh Center for the Arts, Pittsburgh, PA; “New Material World,” Sheldon Museum, University of Nebraska, Lincoln; “Rijswijk Textile Biennial 2011,” Museum Rijswijk, Netherlands; the second and seventh ”Cheongju Juried Craft Exhibition,” Korea; and the first, second, third and fourth “International TECHstyle Art Biennial,” San Jose Museum of Quilts and Textiles, California.  An exhibition of her weavings, along with those of Rowland Ricketts was presented in the new Center for Visual Arts Gallery at Kent State University in the fall of 2016.

Lessman-Moss has been awarded a number of Individual Artist Fellowships from the Ohio Arts Council  beginning in 1984, and received an Arts Midwest/National Endowment for the Arts Fellowship in Crafts.  She won the prestigious Governor’s Award for the Arts in Ohio in 2016, the Cleveland Arts Prize Lifetime Achievement Award in 2019, and a coveted United States Artists Fellowship also in 2019.

Lessman-Moss has taught at Kent State for over 35 years and was recognized as a Distinguished Scholar at the university in 2000, and received a Distinguished Teaching Award in 2018.  She is strongly committed to education in textile art and design and maintains a vibrant studio in the School of Art, working with Textile Art majors and minors from tangential fields such as Fashion, Architecture and Interior Design.  Students have an opportunity to learn a breadth of traditional weaving techniques and explore digital design and production using TC1 jacquard looms and Pointcarré® software.

As a member of the textile community, Lessman-Moss served as External Relations Director for the Textile Society of America from 2006-2010 and is a Founding Member of the Midwest Fiber Art Educators Network (MFAEN.)  She has also curated various exhibitions of textiles and pattern including: “The Poetics of Pattern,” Riffe Gallery, Columbus, Ohio; “Binary Fiction: Digital Weaving 2010,” the Eisentrager-Howard Gallery, University of Nebraska- Lincoln; and “Circles, Cycles and Structures,” Firelands Association of the Visual Arts (FAVA), Oberlin, Ohio, to name a few.

Her art practice revolves around an interest in the interconnection of abstract systems rooted in the common binary language of the computer and the loom.  Networks of patterns, composed digitally on the computer screen are informed by the architecture of the weaving process in combination with an intuitive sense of order and improvisation.  Based in the geometry of the circle within the square, a relationship is orchestrated between the stability of the horizontal and vertical axes of the grid – the warp and weft threads of the weaving - and the dynamic fluidity of the curve.  This dense field of motifs is intended to reflect the essence of competing dynamics in our own world; of circular and linear time, of the finite and infinite; a complex connection rooted in an underlying order.

For more information about Lessman-Moss and her work please visit her website:  www.janicelessman-moss.com