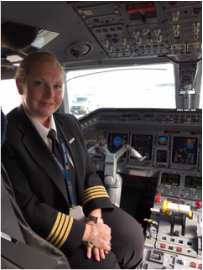 Irena Wentzel grew up in Lakewood, Ohio and attended Kent State University from 2001-2006 as a double major in Flight Technology and Aviation Management. Upon graduation in 2006, Irena was hired at ExpressJet Airlines as a First Officer on the Embraer 145. She lived in Houston for 6 years, and in 2012 was upgraded to Captain where she moved back to Cleveland and also spent some time being based in Newark. While at ExpressJet she is involved with both the Safety and Recruiting Departments.