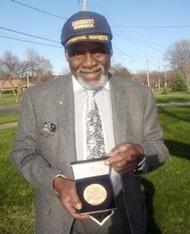 A member of the famed Tuskegee Airmen, Roy S. Richardson worked the flight line pre-flighting, taxing, and performing aircraft maintenance during WWII.  Mr. Richardson joined the United States Army Air Corp out of high school with the dream of becoming a member of the 766th Army Air Corp band.  After basic training, he was assigned to the all black 332nd Fighter Wing at Lockbourne Air Base in Columbus, Ohio.  He volunteered for a unit being formed as the 2221st Special Service Group, a popular USO Tour that entertained servicemen across the world.  No one knows how many Tuskegee Airmen are still living.  Their valor and success protecting the bombers on combat missions was instrumental to the integration of the United States Military.  Mr. Richardson was awarded the Congressional Medal of Honor in 2007 by President George W. Bush and he now travels around NE Ohio teaching the history of the Tuskegee Airmen.