The PBS special, which is based on the best-selling book by paleobiologist Neil Shubin, has three chapters: “Your Inner Fish” that debuted April 9, “Your Inner Reptile” that premiered April 16, and “Your Inner Monkey,” which will air April 23 at 10 p.m. locally on WVIZ/PBS ideastream and WNEO/Western Reserve Public Media. Viewers outside the Northeast Ohio region can check their local listings.

“Our interviews were filmed last year,” Lovejoy said. “The series is on transformative fossils. We’re a part of the ‘Your Inner Monkey’ program, and I talk about Ardipithecus ramidus.”

Ardipithecus ramidus, or “Ardi,” is the hominid species that lived 4.4 million years ago. It was unveiled by an international science team on Oct. 1, 2009, that included Lovejoy and Latimer. “Ardi” was named Breakthrough of the Year for 2009 by Science and its publisher, AAAS, the world’s largest science organization. Research findings on “Ardi,” which change the way we think about human evolution, were presented in 11 papers that appeared in the organization’s journal, Science. Lovejoy was first author on five papers and contributed to an additional three.

Latimer is the founding director of Case Western Reserve University’s Center for Human Origins and a professor of orthodontics at Case’s School of Dental Medicine. He also holds adjunct appointments in anthropology, anatomy and cognitive science and is a founding fellow of Case’s Institute for the Science of Origins. He was previously executive director of the Cleveland Museum of Natural History. His research involves the comparative anatomy and biomechanics of primates, particularly the origin of humans’ ability to walk upright, and has been published in Nature, Science and other influential journals. Latimer earned his Ph.D. in biomedical sciences at Kent State.

Kimbel is the director of Arizona State University’s Institute of Human Origins and the Virginia M. Ullman Professor of Natural History and the Environment in the ASU School of Human Evolution and Social Change. He conducts field, laboratory and theoretical research in paleoanthropology, with a primary focus on hominid evolution in Africa during the Pliocene and Pleistocene epochs. Kimbel earned his Ph.D. at Kent State and was an editor of the Journal of Human Evolution from 2003 to 2008. He is a fellow of the American Association for the Advancement of Science.

For more information about PBS’s “Your Inner Fish,” visit www.pbs.org/your-inner-fish.

Photo Caption:
C. Owen Lovejoy, Ph.D., stands next to the reconstructed skeleton of “Lucy,” a near-complete fossil of a human ancestor that walked upright 3.2 million years ago. 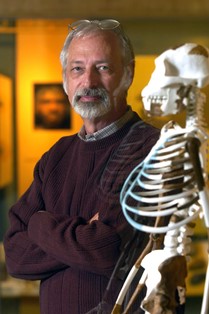 2020 Ph.D. Graduate Learned How to Cultivate Meat in the Lab While at Kent State
Among those receiving their doctoral degrees from Kent State this fall is Jessica Krieger. She will receive her Ph.D. in biomedical sciences –...
KSU's Seventh Annual Neuroscience Symposium Will Address the Addicted Brain
The Brain Health Research Institute and the College of Arts and Sciences will host the Seventh Annual Neuroscience Symposium on April 4-5 at the Kent...
School of Biomedical Sciences
College of Arts & Sciences