Contact us at 330-672-EMBA or via the form below to receive more information about our EMBA program. 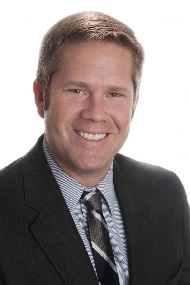 Sales & Marketing Executives International, Inc. (SMEI Akron-Canton), the only global sales and marketing professional association, presented Brickley with the award to celebrate his commitment to excellence.

“I don’t believe I’d be where I am now if I hadn’t earned my Executive MBA,” he said.

“When I found out I was nominated to receive a Distinguished Sales and Marketing Award, it was a surprise,” Brickley said. “I was among 73 sales and marketing professionals that would be voted on to make up the class of 30 award winners for 2015.”

At the ceremony, Brickley chose Mary Ann Burich-Boccia, who helped him through his career at Mercy Medical Center, to present him with the award.

“It is an honor to not only receive a Distinguished Sales and Marketing Award, but also represent Mercy Medical Center,” Brickley said.

The Road to Success

Although he graduated with an undergraduate degree in history, Brickley began his professional career after college by working in sales.

“At some point I decided I wanted to take the next step in my career,” Brickley said. “I didn’t have a business background. I had the skills, but I felt I was lacking the education to back up those skills.”

He decided to pursue his Executive MBA while maintaining his current position at Mercy Medical Center and enrolled in the first Executive MBA for Healthcare Professionals program.

Without a background in business, Brickley said the diversity in his classes helped provide him with real-world applications.

“The program was great. The instructors were very knowledgeable, but for me, the biggest takeaway was the time spent with my classmates,” Brickley said. “They are a wealth of information. The coursework gave me the working mechanics and learning from my classmates really helped me gain a practical understanding.”

Brickley said he attributes much of his career success to the skills and lessons he learned while earning his Executive MBA at Kent State.

“Earning my Executive MBA directly allowed me to take the next step in my career,” Brickley said. “I became the Director of Sales, a position they created for me, and created a sales and marketing team for the hospital.”

Discover How Our EMBA Program Can Help You

To learn more about Kent State’s Executive MBA programs or our information sessions, contact the Graduate Program Office in the College of Business Administration today.

Learn More About the Program