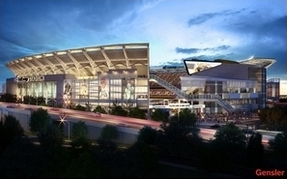 The 10 biggest sports stories in Northeast Ohio in 2013

2013 was another year without a championship for Cleveland sports fans, but there was plenty going on, from a majorIndians revival to drama in the non-sports business of Browns owner Jimmy Haslam.

Here are our picks for the 10 biggest sports stories of the year in Northeast Ohio.

Of Cleveland's three big professional sports teams, only the Indians posted a winning record this year. But it was the two losers — sorry, Browns and Cavaliers — that had players post breakout seasons and gain national attention.

For the Browns, wide receiver Josh Gordon has emerged as one of the elite players at his position. With one game left this season, Gordon has 80 catches for 1,564 yards and nine touchdowns. And he missed the first two games of the season due to a suspension. And he had Brandon Weedenand Jason Campbell throwing to him for most of the year.

9. A tradition of excellence

The University of Akron men's soccer team qualified for the NCAA Tournament — for the seventhconsecutive year.

That puts the Zips in elite company, as only seven other teams have matched such a run.

Akron finished the regular season ranked No. 7 in the nation, according to the National Soccer Coaches Association of America poll, and it took a 10-game unbeaten streak into the NCAA Tournament. The Zips then knocked off 2012 NCAA champion Indiana — a perennial soccer power — before losing in the second round to Marquette.

Making the season all the more impressive was that it came under new head coach Jared Embick, a former Zips assistant who was elevated to the top job when Caleb Porter was named coach of the Portland Timbers of Major League Soccer. (And Porter was a tough act to follow. He won an NCAA title at Akron in 2010 and was named MLS coach of the year this year.)

For his work, Embick was named All-Ohio Coach of the Year by the Ohio Collegiate Soccer Association.

Nearly 11,000 athletes age 50 or older came to Northeast Ohio this summer for the 2013 National Senior Games, competing in 19 sports at venues across the region.

The event provided a $36 million boost to the Northeast Ohio economy, about $1 million more than originally forecast, according to a study from the Greater Cleveland Sports Commission and Kent State University's Department of Economics.

The sports commission said an estimated 18,000 family members and friends also traveled to the region for the event.

Even by the sometimes out-there standards of a Major League Baseball relief pitcher, Indians closer Chris Perez had a weird year.

In June, Rocky River police searched the home of Perez and his wife, Melanie, after a package of marijuana was delivered to their house. The package was addressed to the couple's dog. The couple — the humans, not the dog — subsequently faced misdemeanor drug charges. (Perez pleaded no contest and was put on probation.)

He was 25 for 30 in save situations in 2013, but down the stretch for the Indians' playoff run, Perez was terrible and essentially unusable. He ended the year with a 4.33 ERA in 56 games.

Perez, 28, was not tendered a contract by the Indians after the season. He just signed a one-year deal with the Los Angeles Dodgers.

The Browns, Cavaliers and Indians all were led by new head coaches/managers this season, and for all three, it was a homecoming of sorts.

Terry Francona of the Indians, of course, enjoyed the most success, leading the team to the playoffs and winning AL Manager of the Year. Within baseball, he's known as Tito, the name of Francona's father, an All-Star outfielder for the Indians in 1961.

Mike Brown, fired by the Cavaliers after the 2009-10 season in an unsuccessful attempt to convince LeBron James to stay in town, made his way back to the team this year when owner Dan Gilbert decided the team needed a steady leader back at the helm.

So far, it hasn't made much difference, though, as the Cavs are 10-17 and many nights look just awful.

For the Browns, new head coach Rob Chudzinski has seen a once-promising season — remember the Brian Hoyer boom? — turn sour, as the team now stands at 4-11 heading into the finale in Pittsburgh. Chud was the Browns' offensive coordinator in 2007, the last time the team was good; he'll need a quarterback — whether it's a healthy Hoyer or someone obtained in the draft — to get the Browns turned around.

5. And speaking of turnarounds …

The Indians made a thrilling September run — they won their last 10 games — to finish 92-70 and qualify for a Wild Card spot in the playoffs.

They lost at home to the Tampa Bay Rays in their one-game playoff, but the team once again gave Cleveland fans a taste of how fun it is to watch meaningful baseball in the fall.

The bounce-back season followed some uncharacteristic spending in the off-season on big-name free agents, including Michael Bourne and Nick Swisher. Neither was great in 2013. With a questionable starting rotation — at least for now — heading into 2014, the Tribe will need Bourne and Swisher to pick up their games for a return to the playoffs.

The only downside for the 2013 Indians? Nobody came to the games.

As Crain's assistant editor Kevin Kleps wrote in mid-September, “During a nine-game homestand from Sept. 2 to Sept. 11 — one that concluded with the Tribe 1½ games out of a playoff spot in the American League — the Indians drew an average of 13,518 fans. Two of the crowds in the nine-contest stretch were under 10,000, including a low of 9,962 on Tuesday, Sept. 2, against the postseason-contending Baltimore Orioles.”

In that story, Indians president Mark Shapiro said, “I think the largest driver of our attendance numbers are tied to our market size. The second factor is we need to get a greater number of season tickets or advanced purchases in a city where so few people live and work downtown.”

Maybe making the playoffs will soothe that anger.

3. Definition of a tough year: The Browns are the less-problematic of your two businesses

Haslam, who bought the Browns in a $1 billion deal in summer 2012, was at first dismissive of the raid, telling reporters that the investigation involved a "very insignificant number of customers."

But soon after the raid, a judge unsealed a 120-page affidavit “that included transcripts of secretly recorded discussions among senior members of the sales team that candidly — and often crassly AP — outlined the scheme to defraud trucking company customers deemed too unsophisticated to notice that they were being cheated out of rebates and discounts they were entitled to,” according to CSPnet.com, which covers the convenience store industry.

Pilot Flying J has subsequently sought to settle a class-action lawsuit that paid 5,500 trucking companies $85 million in reimbursements and interest for the money out of which they were cheated. A federal judge approved the settlement last month; some Pilot Flying J customers opted out and continue to pursue their own claims.

Many Browns fans were outraged when the Browns on Sept. 19 traded running back Trent Richardson — the No. 3 pick in the 2012 NFL draft — to the Indianapolis Colts for a first-round draft choice in 2012.

It turns out that the deal was genius, as Richardson has been beyond awful for the Colts, averaging less than 3 yards per carry and scoring just two touchdowns in 13 games. (Jim Brownreally called it in spring 2012.)

The challenge now for Joe Banner, Mike Lombardi and the rest of the Browns brass is to buck the team's recent history and hit it big in the draft.

The Browns in November scored a major victory with Cleveland City Council, which approved the team's proposal for $120 million in upgrades to FirstEnergy Stadium.

The deal calls for the city to take $2 million a year for the next 15 years from its operating fund to reimburse the Browns for a share of the improvement costs. In addition, the city will spend $12 million from the existing sin tax fund of $24 million for capital repairs, beginning in 2016. As part of the deal, Cleveland will grant the Browns the right to provide input on how the $12 million will be spent.

The renovation plan for the 15-year-old facility will include two new scoreboards in each end zone that would be triple the size of the current scoreboards; LED video boards with statistics, scores and information; a new audio system; and two new escalators, among other changes. The new scoreboards will be in place at the stadium for the 2014 season.

Reconfiguration within the stadium, primarily to accommodate the video boards, will reduce seating capacity to about 68,000 from the current 71,000.