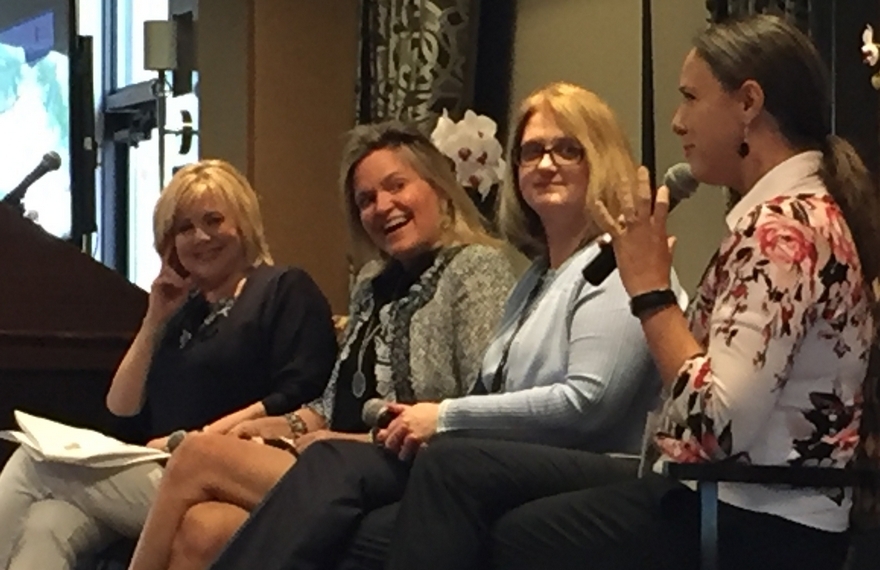 At Bridgestone Invitational Executive Women's Day, it's as much about golf as it is business

Based on some of the numbers coming from the Bridgestone Invitational Executive Women’s Day, Northeast Ohio business women seem to like the game of golf.

Of the 110 women in attendance at the June 28 event at Firestone Country Club in Akron, about 95 participants picked up a club during one of two golf participation options, organizers estimated. That’s a good percentage picking up the sticks.

Executive Women’s Day was in its fifth year at Firestone — ahead of this year’s Bridgestone Invitational Thursday, June 20, through Sunday, July 3, where some of the PGA’s top players will take to the course.

The day included networking, a panel discussion and a keynote address. And, of course, golf. The PGA Tour is holding about 20 similar events this year across the country at its tournament stops, according to Kelli Ferris, PGA tournament activation and community outreach specialist.

But not all of the cities are as golf-savvy as Akron, she said. In fact, some don’t even have a golf-participation component their programs.

Along with providing a forum for professional development and to discuss corporate topics, the PGA with its executive women’s forums wants to let women “know that business is being done at the course and at PGA Tour events,” Ferris said.

In other words, being comfortable with a driver in your hand is a good way to help your business or career, because deals really do happen on the fairways.

Of course, another factor is that the PGA would love to have more women attend its events.

Akron-area businesswomen, though, seem to like having a good walk spoiled. Over the years, golf has been a part of the event, albeit in different formats. One year the panel and forum were held on one day, with an 18-hole golf option on another day.

This year’s executive day offered the women a chance to play nine holes at Firestone or participate in a beginner’s golf clinic, a first for the Akron event. About 45 women hit the course, and about 50 started to get themselves familiar with the game.

Ferris said the clinic was well-received.

“After the event, talking with the women, they really enjoyed having a safe environment to pick up a club … They can come out here and be able to talk about golf and interact maybe on a business level,” she said.

For some, playing a championship course like Firestone was clearly the lure, but they said they were pleasantly surprised with the day’s other activities.

“So far, I’m impressed,” said Michele Schefler, a consultant with UYS Inc., after the morning’s panel discussion. She and Kathy Koch, director of health information at Southwest General Hospital, liked that some of the younger women in the room could hear insight from more seasoned professionals.

The lively panel discussed a range of topics — from the importance of having mentors in the workplace and setting your own personal advancement plan, to the ubiquitous question about work-life balance that only seems to be asked of women.

Adams gave a uniquely local spin to the conversation. The Akron native and University of Akron grad always loved racing and worked her way into a male-dominated world of car building, right in her home town.

“I thought in order to have a really cool job, you had to leave Akron; that’s not true,” she said in an interview.

The forum activities concluded with a keynote address from Molly Barker, founder of Girls on the Run, a national program to teach life skills and running to girls ages 8-13, and the Red Boot Coalition, a nonprofit that looks at promoting civil discourse.