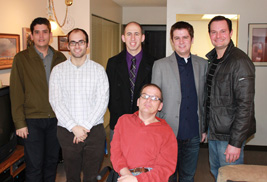 When Kent State College of Business Administration Entrepreneur-in-Residence Craig Zamary first heard the story behind the foundation of an alumnus of the college, he jumped at the opportunity to help support its mission.

Kent State College of Business Administration alumnus Pete Zeidner established the Pedal-with-Pete Foundation in 1993, to raise funds for cerebral palsy (CP) research through bike rides and walks. Zeidner, who himself was born with cerebral palsy, has helped raise more than half a million dollars and has the goal to reach the one million dollar mark.

Zeidner, an avid bicyclist who used to ride 60-80 miles a day, lost 80 percent of his body function from an accident that occurred in 1999. He has since been confined to a wheelchair and has not been able to cycle to support his foundation. This, however, has not dampened his passion to make an impact on cerebral palsy research.

“[I Started] the foundation because CP is way underfunded, and you never hear about CP research like you do for MS or spinal cord injuries, and I thought that there should be more funding for research,” Zeidner says in a video interview on the foundation’s website.

With National Cerebral Palsy Awareness Month set for March, Zamary suggested the project to his student, Victor Newman, who needed to complete his practicum for the entrepreneurship major.

Newman, whose goal is to work for a nonprofit after college, has experience managing fundraisers for his fraternity Alpha Epsilon Pi. He put his experience to work for the Pedal-with-Pete Foundation engaging in a series of promotional tactics to increase the foundation’s visibility.

To promote and create more awareness for the foundation, Newman pulled in students from other disciplines to help create a video that captured who Zeidner is and what his organization stands for.

Together with fellow entrepreneurship major Chris Lintner, Newman worked with journalism and mass communications senior Simon Husted to produce the video, and with visual communication and design graduate student from El Salvador Diego Brito to create a landing page and Web page design for the foundation.

“Collaborating with other students was helpful and educational for me,” Newman says. “Overall, I found the entrepreneurship practicum very helpful for me to grow as a student, and, one day, into an entrepreneur.”

Husted, who helped produce the video for the foundation, was excited to be part of the project and partnership with other students.

“When Victor told me about Pedal-with-Pete, I really couldn't say no,” Husted says. “It was very rewarding to see someone ask, utilize and appreciate my skills, and I'm glad I was a part of such a noble cause.”

Zamary is proud of what the students achieved for Zeidner’s foundation. He expresses hope for a sustainable partnership between Kent State and the Pedal-with-Pete Foundation.

“It was awesome to see a student pull in other students from different disciplines to work together and collaborate. It was powerful!” Zamary says. “Pete has an incredible mission, and this is an incredible opportunity for our students to engage with Pete and his foundation and work with him to promote his life’s work. The experience of working with him will stick with these students for a lifetime.”

Christopher Redmond, another College of Business Administration entrepreneur-in-residence, who was pulled into the project by Zamary, also expressed satisfaction with the high-quality of the students’ work.

“The collaboration was fantastic,” he says. “They seemed to have worked really well together and produced a great product.”

“I think Pete is a wonderful human being,” Newman says. “What's astonishing is not the fact that Pete
continues to push himself, but that he does so even after experiencing an accident that would cause a regular person to quit. He doesn’t quit and continues pursing his goal of helping others through his foundation.”