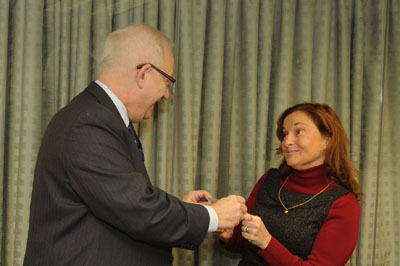 The President's Excellence Award was implemented in 2009 to recognize full-time classified and unclassified employees who demonstrated exceptional performance in advancing one of the goals of the university's excellence agenda during the previous fiscal year. More than 200 nominations for this year's program were received, representing 138 staff throughout the eight campuses.

The criteria included actions, initiatives or projects related to student success, diversity and inclusion, effectiveness and efficiency, quality customer service, collaboration, sustainability and serving as an ambassador for the university.

Lefton says this year's nominations brought to light the many examples of excellence that take place every day across the Kent State campuses. "The achievements of our nominees highlight much of what Kent State accomplished during the 'Year of Yes' and also demonstrate the dedication and diligence of our staff, in ways both large and small."

The College of Business Administration's own Michelle Parrish was among the recipients of the 2010 President's Excellence Award. Congratulations Michelle!

Michelle Parrish's supervisor nominated her for being a shining example of student success. Through her tireless efforts all 41 graduate students in the financial engineering program were able to secure internships with high-profile business firms despite the difficult economy. Throughout the process, Parrish worked with the students to make sure they were prepared for their interviews and organized career development workshops. Parrish was also recognized for getting to know each student in the 12-month program and helping them prepare for success after graduation. Her nominator says it is no surprise that her relationship with the students does not end with graduation; she remains a resource to them for job opportunities, recruiter information, continued motivation and advice.