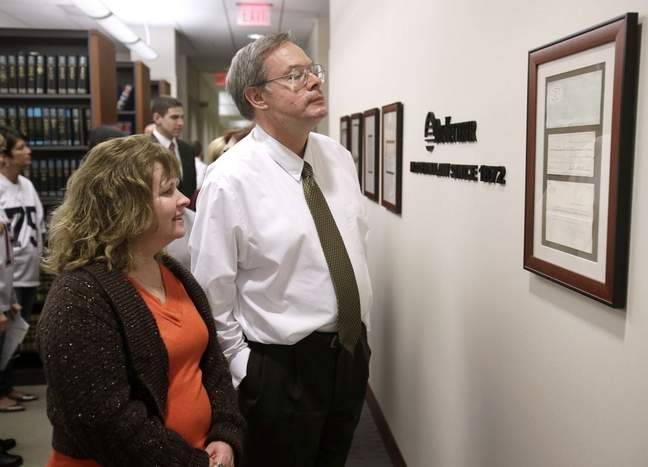 When the lawyers at Day Ketterer were looking for a new slogan to define their firm in the years ahead, they made sure to take a cue from the past.

The downtown fixture rolled out its new tag line — "Modern Law Since 1872" — late last month alongside a display of framed documents, some dating back to the firm's founding. The marketing update is the culmination of a process that began in March.

"We were coming off of our 140th (year), we're going into the next decade and we felt that this was a good time to go ahead and reconvey our brand," explained Jennifer Novotny, the firm's director of client services and development.

Day Ketterer's leadership wants the new slogan to convey the image of longevity sustainability and progressiveness.

"We are grounded by our perspective of our past, but defined by our aspirations for the future," said Robert E. Roland, the firm's managing partner.

When it comes to history, Day Ketterer can show more than decades. One of the founders, William R. Day, was a close ally of William McKinley and served as the president's secretary of state. Day capped his career by spending 19 years on the U.S. Supreme Court.

The law firm he founded with William A. Lynch did all right, too.

Day Ketterer now has about 40 attorneys and offices in Canton, Hudson and Cleveland. Its specialties include litigation law, business law, labor and employment law, and recently, education law.

For much of its history the firm has focused on Stark County, but in recent years it's been growing, and is looking to expand to surrounding counties as a regional practice, Roland said.

The law firm arrived at the new tag line through a months-long process that started with focus groups of attorneys and staff and included input from downtown-based Jab Advertising.

The slogan replaces the 2006 tag line, "Redefining the power suit since 1872," which was shown next to a suit of armor wearing a tie.

"It serves to tell the public and ourselves what makes us stand out from our competition," Novotny said.

In marketing, themes of history or tradition are often attached to prestige or high-cost goods, said Pamela Grimm, chair of the Department of Marketing and Entrepreneurship at Kent State University's College of Business Administration.

For example, Parker Pens is touting its 125th anniversary this year, and luxury watchmaker TAG Heurer bills itself as "Swiss avant-garde since 1860."

Highlighting heritage also can be a way for businesses that provide a service, such as law firms, to draw concrete distinctions between themselves and competitors, Grimm said.

Longevity conveys the idea, 'If they're around for a long time, they're doing something right," she said.

The risk is that potential customers will see an historic brand, not as a classic, but as stodgy and behind the times.

The Day Ketterer slogan carries an inherent tension between the modern and the historical, Grimm said. "How their target market will see it, I don't know."