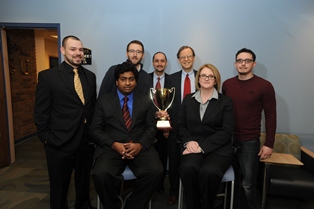 Members of the winning team include Josh Hostetler, Brad Neumann, Frank Russ and Kaushik Saha, all second-year MBA students who will graduate this May. They won an all-expenses-paid trip to Orlando, Fla., for the ACG Global Conference in April.

The group used what they learned inside and outside of the classroom throughout the last year and a half to prepare. Doug Lightner, instructor in the MBA program at Kent State’s College of Business Administration, was assigned to be the group’s coach during the last month of preparation, but once the team received its case a week before the competition, no one – including Lightner – was allowed to help the team according to the rules of the competition.

“They had to prepare an analysis, alternative recommendations and argue why one of the possible courses of action was the best,” said Jaume Franquesa, Ph.D., Kent State’s MBA program director. “Then they presented an implementation plan for their option: explained how they would pay for it and took into account any potential problems and how they would deal with them.”

The group competed against teams from other MBA programs in the Cleveland area, including Cleveland State University, Baldwin Wallace University and Case Western Reserve University.

The ACG Cleveland Chapter held a reception after the competition for all of the ACG Cup students and their coaches. Also in attendance were the judges, ACG members and board members.

“This was a great opportunity for students to network with leaders in the Northeast Ohio community,” said Tod Wagner, who coordinated the competition.

The team also attended ACG’s Deal Maker Awards event where more than 700 professionals attended. That was where the Kent State group received its ACG Cup.

“I’m very excited about our win because it’s a confirmation that all of the efforts we’ve made in this program in the past two years are working,” Franquesa said. “We’ve placed greater emphasis on experiential learning and the development of so-called ‘soft skills,’ which are very important for success in business. Students are not just learning concepts, they’re applying them; they are doing things. This is very fitting to the university’s excellence in action agenda. It’s a testament to the quality of our program.”