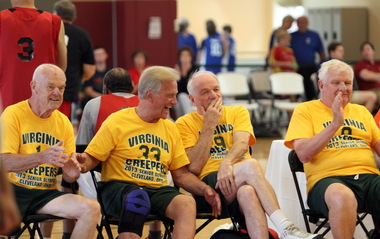 CLEVELAND, Ohio--The visitors who descended on Cleveland in July for the National Senior Games were not your typical Olympians. Not only were they older athletes (50-plus), they tended to be wealthier, travel savvy and prone to view sports as part of an active lifestyle.

They dove into a lakefront city and left smiling.

By the time the torch was extinguished in downtown Cleveland, about 25,000 athletes and their fans had poured an estimated $36 million into the local economy, according to a study by the Kent State University Department of Economics.

That's about $1 million more than organizers forecast being spent.

"That's a lot of money," said Shawn Rohlin, the KSU professor who led the study. "That's the equivalent of dropping $36 million on the streets of Cleveland and watching where it goes."

It went into hotels, primarily, but also into restaurants, shops, museums and theaters.

If the strangers spent their money liberally, they also liked what they bought. Working with the event sponsor, Rohlin and his team surveyed athletes to glean their before-and-after impressions of Cleveland. The results are eye-opening.

A whopping 80 percent of people who traveled to Cleveland for the games left with a more positive impression of the city, the survey found.

On a scale of 1 to 10, Cleveland averaged a 5 in the view of arriving athletes. By the time they left, that ranking had risen to nearer an 8.

More intriguing, and perhaps perplexing, is that a majority of local participants ended the games with a more favorable view of the city.

Organized by the Greater Cleveland Sports Commission, the senior games represented Cleveland's largest visitor event in decades and served as a warm up to the international Gay Games this summer.

The visitors not only liked the games, they loved the city--and probably went home and said so.

The Fund for Our Economic Future continued its support of BioEnterprise, a Cleveland bioscience development agency, with a recent $550,000 investment into its operations.

The Fund's governing board, called the Funders Committee, approved the one-year grant Dec. 5 to help grow the bioscience industry centered around University Circle. The Fund, a collaboration of philanthropies, first invested in BioEnterprise shortly after the Fund was formed in 2004.

The latest investment is meant to support a positive economic trend, according to Deborah Hoover, the chair of the Fund's board of directors.

Thanks to BioEnterprise and its partners, she said in a statement, "Northeast Ohio is becoming the top Midwest market for bioscience investors, and that is resulting in more jobs and increased opportunities for our region's residents."

The Funders Committee meets quarterly to consider grants and to review the Fund's efforts to promote the region's economic competitiveness.

Nearly 1,000 young professional are expected to mix and mingle among the dinosaurs tonight at the fourth annual Engage! Cleveland Holiday Mix, which begins at 5:30 p.m. (December 11) at the Cleveland Museum of Natural History in University Circle.

Engage! Cleveland was launched last year to attract and retain young, diverse talent in Greater Cleveland. The Mix, one of its biggest events, will combine professional networking with a holiday celebration in one of the city's premiere museums. Partygoers are invited to view exhibits and visit the planetarium.

"The response to this year's Holiday Mix has far exceeded our goals and we're thrilled to have the opportunity to bring together so many of our area's young professionals for such a great event," Ashley Basile Oeken, the executive director of Engage! Cleveland said in a statement.

A report that highlights the lack of population churn in Cleveland caught the eye of an influential urban affairs analyst, who sees a critical message for many older, "legacy cities" hoping to compete in the global economy.

Aaron Renn says a city that does not welcome new cultures and ideas is sure to fade.

In a study released last week (PDF), researchers Richey Piiparinen and Jim Russell argued that Cleveland's population is falling almost on purpose. They point out that the region does a better-than-average job of retaining its residents but attracts very few newcomers, partly because it does not try very hard.

Piiparinen and Russell say a "culture of parochialism" has left many Clevelanders fearful of the new ideas and cultures, so much so that many political and civic leaders will accept a shrinking city over a changing city.

"Cleveland is not a global city," he writes in a recent posting. "In fact, in his book Caught in the Middle, Richard Longworth said, "When I went to Cleveland I found not alarm but complacency. In a city that is being destroyed by global forces...I found almost nobody willing to actually talk about globalization or global challenges...In all my travels through the Midwest, Cleveland was the only place, big or small, that seemed heedless of the global challenge."

Part of that complacency comes from a lack of newcomers, including immigrants.

"Clearly Cleveland is drawing fewer people from the outside world, and drawing from fewer places, than cities that are performing better," he writes. "As a result, we see what is frequently true in such places. Cleveland's social and power networks have Balkanized."

Demographic churn, he argues, would bring fresh talent and ideas, open up social networks and help Cleveland connect to the world.