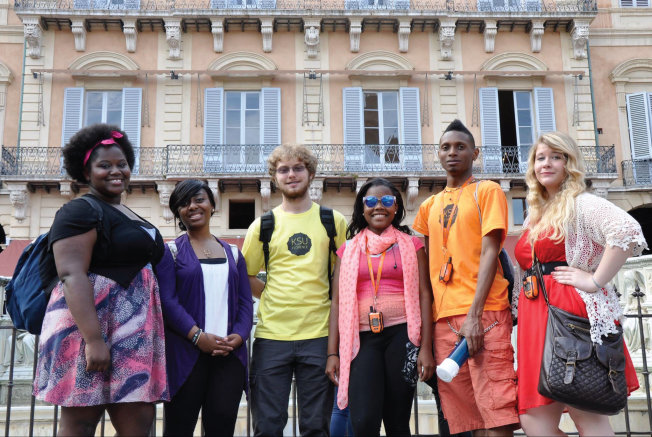 Aspiring music student Dennis Meacham spent the month of June studying in the Italian city of Florence, home to Michelangelo's "David" and the possible birthplace of opera. It was an experience he thinks will shape his career trajectory as he studies to become a music teacher.

"Having a global perspective opens you up to different things," Meacham says.

Most students who spend time abroad say the experience was transformative in some way, but it meant a little more to Meacham. The incoming Kent State University freshman from Barberton, Ohio, was one of six students selected for a pilot program to create more study-abroad access for disadvantaged students – minorities or those from low-income families who might not have had the opportunity to go overseas otherwise.

"I always wanted to travel somewhere," says Meacham, who self-identifies as middle-class. "But I would have to figure it out on my own."

Kent State this summer partnered with local centers of Upward Bound – a federal program that helps high schoolers from low-income families and those who would be first-generation students prepare for college – to run and fund the pilot program. At a time when studying abroad is becoming more common and more expected of college students, some face financial, social and cultural barriers that could stop them from going overseas, and more colleges are finding ways to increase access.

"Colleges need to prepare critical thinkers, and there are no critical thinkers if we don’t show people that there are different realities around the world," says Marcello Fantoni, associate provost for global education at Kent State. "Some disadvantaged students come from environments that are not conducive to studying abroad. Their family background, their cultural background, even the expectations they have about college education – it doesn't include an international component."

The numbers show how underrepresented some student groups are. In the 2011-12 school year, a record number of students from the U.S. – 283,332 – studied abroad, according to the Open Doors report, an annual survey conducted by the Institute of International Education. But of those students, more than three-quarters were white. All other racial and ethnic groups each made up no more than 7.7 percent of the total student population.

And while there are no statistics breaking down the study-abroad population by family income, it's known that finances often prevent students from making the journey.

"A lot of students in other universities with more means have an easy access to an international education," Fantoni says. "But for these students, this is a one-chance opportunity, and if we help them get this, that can really have a major impact in their lives."

The tuition for studying abroad varies greatly between campuses, states and destination countries, and whether it's more costly to go overseas depends on a number of factors. For example, a student living in a high-rent area like New York City who travels to a country where the cost of living is lower likely would have an easier time financing the trip. But a student from another part of the U.S. traveling to Europe could face a much different situation.