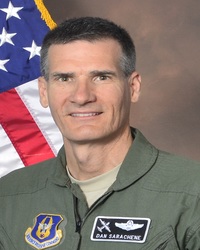 Daniel Sarachene is a military and commercial airline pilot with more than 30 years of experience in aviation. He is a 1989 graduate of Kent State University (KSU), studying Industrial Technology while completing the KSU flight program from Private Pilot through CFII and a FAA Air Traffic Control Cooperative program.

He was a KSU certified flight instructor prior to joining the United States Air Force Reserve in 1990.  Sarachene is a Distinguished Graduate of USAF Officer's Training School and USAF Undergraduate Pilot Training, earning the Air Training Command Commander's Trophy as the Top Graduate of his Pilot Training class.  His career in the Air Force Reserves has taken him all over the globe, in combat and in support of humanitarian operations flying the C-130H.

His military aviation experience includes positions as C-130H Aircraft Commander, Instructor and Evaluator pilot and has attained the rank of Colonel. Colonel Sarachene has nearly 13 years of military command experience, most recently, holding the position of Wing Commander of the 910th Airlift Wing, Youngstown Air Reserve Station (YARS), Ohio. As the wing commander, he was responsible for the overall combat readiness of fourteen subordinate units with more than 1,300 assigned personnel and eight assigned C-130H Hercules tactical cargo transport aircraft.

As the installation commander, he lead the day-to-day operations and maintenance of a 228-acre facility providing support for the nearly 2,000 assigned Air Force, Navy and Marine Corp Reservists and civil service employees and was responsible for more than $1 billion of federal assets. Prior to his assignment to the 910th Airlift Wing, he held the position of 914th Airlift Wing Vice Commander, 757th Airlift Squadron Commander, 773rd Airlift Squadron Commander and the 910th Operations Support Squadron Commander. Additionally, he has been a pilot with Delta Air Lines since 1997.  He is currently a First Officer on the Boeing 737-700/800/900 and has flown the MD-88 and B-727 where he served as a FAA Certified Check Second Officer.  In total Daniel has attained more than 14,000 flight hours in military and civilian aircraft.  He has been a member of the College of Aeronautics and Engineering advisory board since 2015.