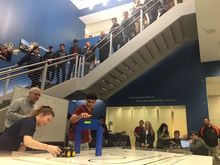 On Friday, students from the College of Aeronautics and Engineering along with high school, middle school and elementary school children competed in the Aeronautics and Technology Building (ATB) for cash prizes and awards.

Mechatronics Professor Darwin Boyd, Ph.D. organized the event, which proved to be not only appealing for participants, but also onlookers. The ATB stairway and atrium were lined with students and faculty eager to see if each new participant’s handmade and programmed bots would follow the line the fastest.

While some students’ machines failed them when they needed them most, others zoomed through the track and drew positive reactions from the crowd. Everyone who worked on projects shared the comradery and sometimes frustration that comes with building robots. Overall, it was a great networking event where code, mechatronics and engineering was enjoyed by all.

Boyd plans to host the event again given the overwhelming response by participants.