Nettey also is first African-American to receive the award 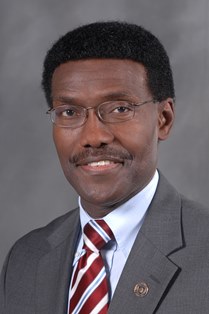 The William A. Wheatley Award is presented annually to a professional educator who is actively involved in the University Aviation Association, has a minimum of 10 years of experience in the aviation education profession and has made outstanding contributions to aerospace education.

Nettey received this award because of his work at Kent State and his work on aviation committees at the National Research Council and the Transportation Research Board of the National Academy of Sciences in Washington, D.C. The award also recognizes his work as the former director of the Airway Science Program at Texas Southern University, during which he served as the elected treasurer and president of the University Aviation Association. Under his leadership, the Kent State aeronautics program became the first and only Aviation Accreditation Board International (AABI) accredited aviation program and Federal Aviation Administration-approved Air Traffic Collegiate Training Initiative (AT-CTI) Program in Ohio.

“Receiving this award is humbling in a way that also provides a sense of affirmation,” Nettey said. “I knew I was eligible before, but when they read my credentials and mentioned my name, it was surreal.”

Randy Johnson, Ph.D., who worked as the chair of the aviation department at Embry Riddle Aeronautical University Prescott and as an aviation professor at Auburn University before becoming the chief learning officer at Baptist Health System in Montgomery, Alabama, nominated Nettey for this award.

“I’m excited and honored to be among the very best aviation professors going back to 1955, which is when the award was started,” Nettey said. “The fact that the nomination came from Randy, a former aviation professor at Auburn University, home of the University Aviation Association for several decades, also makes it quite special.”

Nettey taught his first course in aviation 31 years ago at the University of Louisiana, and has been at Kent State since 2001. In addition to being an associate dean, he is a volunteer professor of the Aerospace Senior Seminar course for graduating seniors in aeronautics and he served as the senior academic program director of the aeronautics program for seven years.

Nettey said he developed an interest in aeronautics as a child.

“My father took us to the airport on some late-Saturday afternoons to watch airplanes take off and land when we were very young children,” he said. “I think that very early introduction to airplanes is the beginning of when I got interested in aviation.”

Photo Caption: I. Richmond Nettey, Ph.D., associate dean at Kent State University’s College of Applied Engineering, Sustainability and Technology, has received the University Aviation Association’s William A. Wheatley Award. Nettey is the first African-American and first at Kent State to be conferred with the prestigious award.