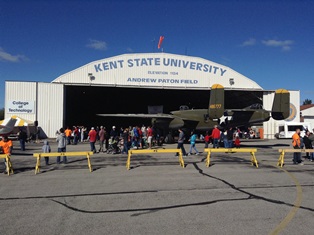 “The purpose of the fair is to give the general public and university students, staff and faculty an opportunity to see history flying, or even on the ground, and to expose people to the rich heritage of aviation,” said Ben Satyshur, aviation safety program manager at the Kent State University Airport. “This is not technically an ‘air show,’ due to FAA restrictions about appropriate clearances, aerobatics boxes, etc. This is essentially a fly-in that is open to the general public.”

Like last year, the fair will have two World War II veterans as speakers brought in by MAPS Air Museum, located in North Canton, Ohio. MAPS also will bring to the fair aircraft that they restored and two jet engines.

There will be static displays of several aircraft, including a North American B-25 Mitchell, a Fairchild C-123 Provider, a Douglas C-47 Skytrain (DC-3), the Cleveland Metro Life Flight, SkyFox 8 and more. This year, there will be roughly 30 aircraft coming in, which is more than in past years.

“We are hoping for a large crowd and for families to come out and enjoy,” said Sheila Lyons, business analyst associate at the Kent State University Airport. “You never know what interests you could spark in children by exposing them to the aircrafts, and some of these children could be future aviation students.”

Event admission and parking are free, but donations and sponsorships are greatly appreciated. Donations also will go toward funding scholarships. Airplane rides on a Cessna 172 will take place from 8:30 a.m. to 5 p.m., and are $25 per person or $70 per group of three, depending on weight. Those interested in airplane rides must register at the sign-up tent upon arrival. Carnival-style food and beverages will be available for sale throughout the day.

The fair will begin with a traditional pancake breakfast hosted by the Stow-Munroe Falls Kiwanis Club from 7 a.m. to 1 p.m. Tickets for the breakfast are $8 for all you can eat. The fair will take place rain or shine, although some events are subject to change due to inclement weather.

Other features of the event include hot air balloon liftoff at 7 a.m., a performance from the Stow-Munroe Falls High School Band from noon to 1 p.m. and a presence of the U.S. Army and Marines. The Ohio State Highway Patrol also will bring in a helicopter and will talk about operations.

A certificate for two seats on Goodyear’s new Zeppelin airship, Wingfoot One, will be auctioned off via silent auction at the fair. The flight will be arranged for a later date.

“There is just so much that people aren’t aware of, for example, the fact that Kent State has its own airport and aviation program and that we’re adding to the aeronautics program,” Lyons said. “This event is good for people not just in Stow, but surrounding communities as well to come out for a family fun day.”

The Kent State Aeronautics Program alumni golf outing will take place on Friday, Sept. 12, at the Roses Run Golf Course in Stow as part of events marking the Aviation Heritage Fair. There will be an alumni photo on Saturday at 2 p.m.

For more information about the Aviation Heritage Fair, visit http://www.kent.edu/AeroFair.