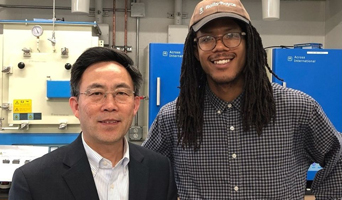 The McNair Scholars Program is a Federal TRIO program funded in part by the United States Department of Education in which student scholars are selected based on academic achievements, intention to pursue graduate education and ideas about research. Pitmon says he hopes to have a job as an aircraft dispatcher while pursuing a master’s degree in autonomous systems engineering.

Pitmon became the first person in his family to travel outside of North America while studying at Kent State Florence. During his time in Italy, he traveled to Barcelona, Spain where he was ironically stranded for two days due to an air traffic controller strike.

Pitmon attributes professors I. Richmond Nettey, Ph.D., Robert Priestley and James Ripple as helping him to gain professional and in-depth knowledge of aircraft and air traffic control systems and procedures. Dr. Yanhai Du (pictured with Pitmon) serves as Pitmon’s Faculty Mentor for his McNair Scholar project. He currently serves as the vice president of the Kent State student chapter of the Organization of Black Aerospace Professionals (OBAP) and is an active member of the Male Empowerment Network (MEN), an organization that seeks to increase unity among men of color.

After graduation, Pitmon says he will move where needed depending on how his career develops. Besides being an air traffic controller, he plans to start his own multimodal transportation company and establish an Aviation High School.