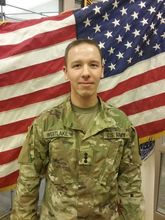 Steven Westlake, a senior mechatronics student at the College of Aeronautics and Engineering has worked with Darwin Boyd, Ph.D., to design industrial robots and considers Mechatronics II to be his favorite class.

As part of the course, Westlake had to build a drone from scratch. While he credits the course with teaching him not only about the science, but also as a lesson in patience as well as being “a fun puzzle to figure out.”

He credits Boyd as an inspiration and helpful during his time as a CAE student.

“Dr. Boyd works tirelessly to help his students in any way he can,” Westlake says. “Whether it's as simple as staying late so we can work in the lab, or doing research on his own to answer any questions we have.”

Westlake also credits his Professor of Military Science, LTC David Simms, saying he knows a little bit about everything and a lot about some things and has challenged him to think critically, manage effectively and use all the skills I will use as an officer in the Army.

After graduation, Westlake plans to commission through Army ROTC as an officer in active duty, beginning as a Chemical officer for four years, and then will be switching to the Signal branch. He says his favorite collegiate experience so far has been going to Air Assault School in January 2017.

“It was quite the challenge,” Westlake says. “My graduation from the school was an event that gave me confidence in myself.”

Besides ROTC, Westlake is a member of H2O and lead one of the Life Groups; he plays in the band, and has helped with the production team in the past.

“In Summer 2017, I had the amazing opportunity to travel to Guatemala in the Army's Cultural Understanding and Leadership Program (CULP),” Westlake says. “Besides representing Kent State to my team members and cadre, I was representing to several senior military leaders in Guatemala.”

While he does not yet know where he wants to settle down, he knows that traveling from duty station to duty station with the Army will give me plenty of opportunities to make a decision.