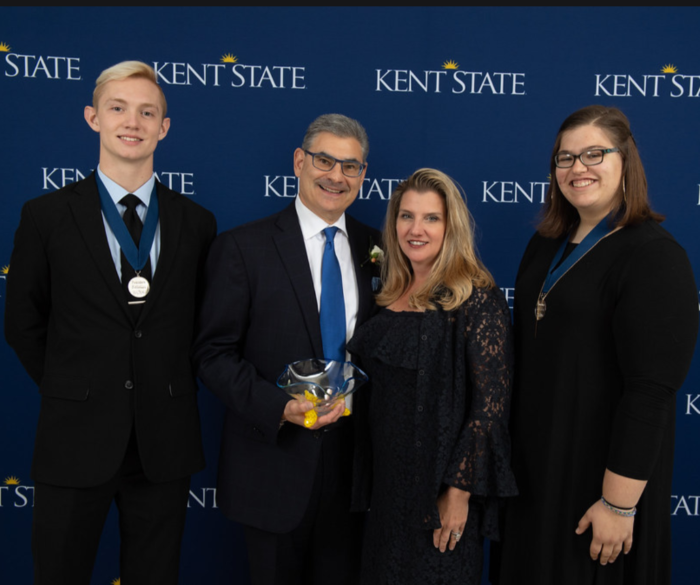 Grant graduated from Edison High School in Milan, OH in 2017. After a late medical disqualification from the Air Force Academy, he chose to attend Kent State University.

The Honors College and its faculty have contributed significantly to Grant’s positive experiences at Kent State. “It’s a great community, I am really happy to be a part of it,” Grant said.

Grant went on to say that the community and the scholarships he received from the Honors College have been the most significant benefits he has received during his time at Kent State. He also stated that their support for undergraduate research within and outside of the college has definitely helped him.

Grant has spent most of his senior year completing undergraduate research as part of the Student Undergraduate Research Experience (SURE) program. “Putting the SURE program on my application for Georgia Tech really made the difference in getting the full ride,” Grant said.

The research Grant has been completing is utilized in a competition at the end of the program. Grant won his respective category for his work.

Grant has been working with Dr. Hossein Mirinejad, a faculty member in the engineering department, as his mentor for this research. “He has helped shape me as a person,” Grant said about Mirinejad.

He is currently working on a conference paper to submit to a medical journal, and if he is accepted, he will be published in the journal.

Grant acknowledges a few other professors who have made significant impacts on him throughout his undergraduate years. Dr. Blake Stringer, who he has had almost every semester since he started, was the one who pushed Grant to apply to Georgia Tech from the beginning.

Dr. Shana K. Reisig, Honors Art History professor, was another professor Grant was grateful for. “I had fun in that Art History class and I didn’t even think I would enjoy the material,” Grant said. He also pointed out that Dr. Mina Katramatou, his Physics II professor, was the reason he picked up his minor, due to her outstanding teaching.

Grant’s favorite course he has taken at Kent State was his Aerospace Vehicle Performance II course. He had a great professor and felt that it took a lot of the courses he had already taken and applied them to control systems theory. This was the first course where he could see everything coming together.

Outside of academics, the community has been the best part of Grant’s experience at Kent State and as a member of the Honors College.

“Literally, the people, the friends, the professors, the connections I have made along the way. It’s crazy when one of my professors from a 70 person course can see me walking past on the esplanade and say ‘Hi Jacob, how are you?’” Grant explained when describing the best part of his experience at Kent State.

An event that stood out to Grant was the Founders Gala. At this event Grant was able to meet the Mr. and Mrs. Rob Risman, who funded The Marion C. & William B. Risman Scholarship that he was awarded. He stated that having the opportunity to express his gratitude to the people who helped make his education possible meant the world to him.

Following graduation, Grant will be attending the Georgia Institute of Technology as a member of a highly selective program, the Aerospace Systems Design Laboratory. He will work with systems engineering in partnership with major companies doing defense research and manufacturing.

Grant is excited about the opportunity to still be able to work with the military in some capacity, as this was his initial plan.

“Something is too good to be true here, I am waiting for the catch. I am very excited and very lucky and very grateful for the opportunity. I am thankful for all the people here at Kent who have helped make this possible,” Grant said.

Grant’s long term goal is to be a project manager for one of the major companies working on the cutting edge projects associated with space exploration and development. He thinks SpaceX would be an especially exciting prospect.

A well-rounded individual, Grant is heavily involved at Kent State. He is the co-captain of Kent State’s high powered rocket team. He is also a member of the Russian club, AIAA (American Institute of Aeronautics and Astronautics), the Honors College, the SURE program, and Delta Tau Delta. He also volunteers for the campus kitchen project and is a TA for the control systems course with his research mentor, Dr. Mirinejad.

In his free time, Grant enjoys catching up with his friends, hanging out with his fraternity brothers, going to the gym, sketching, and writing. Grant mostly writes science fiction and completed most of a novel his freshman year. He is in the process of editing and making adjustments to the novel and would like to eventually publish it. This has been a creative outlet for him.

During the summer, Grant enjoys working at Cedar Point beach renting out jet skis. Jet skiing is one of his favorite activities. He also serves as a lifeguard.

“Get involved, do some extracurriculars, volunteer, do undergraduate research,” Grant said when asked what advice he would give to fellow undergraduate students.

Grant stated that by doing these things, you will have great stories to tell and will learn about the human condition, the world we live in, and yourself.

“During college, make friends. Go out, try new things, experience life as much as you can,” Grant said.

PHOTO CAPTION 2: Jacob Grant pictured (far left) with Mr. and Mrs. Rob Risman, and a fellow recipient of the The 2020 Marion C. & William B. Risman Scholarship.