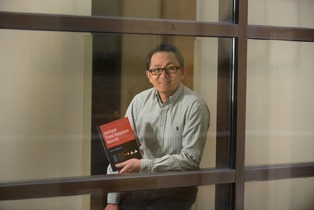 Quan Li, Ph.D., senior research fellow in Kent State’s Liquid Crystals Institute and adjunct professor in chemical physics, will develop a small-scale prototype of a “smart” window that will not only darken or lighten to reduce glare and provide privacy but will control heat flow for energy savings.

His $35,000 award will enable him and his Ph.D. students to test the feasibility of the liquid crystal technology. The glass, which can switch from clear to opaque and vice versa, could have applications in automobile and aircraft windshields, where quick changes are needed to block sun glare. It also would provide privacy control for bathrooms, offices and hospitals, for example.

Unlike other switchable windows, it will control energy and heat flow, making it useful for windows in large buildings and greenhouses, as well as for windows that are otherwise hard to shade from the sun or cover in cold weather.

Li’s prototype will be shown to window companies for possible licensing or for further technology development.

Vladimir Gurau, Ph.D., assistant professor of engineering technology at Kent State University at Tuscarawas, won a $26,600 award to test a robot end-effector, which is like a “hand” on a robot arm. It would be used to reduce the cost of manufacturing fuel cells. The end-effector allows the robot arm to be flexible and precise in grasping and aligning parts.

Making proton exchange membrane (PEM) fuel cells is a labor-intensive process requiring precise assembly. The end-effector has vacuum cups that allow it to grasp thin, flexible components and align them properly. This automates and speeds up the manufacturing process, decreasing unit costs and reducing the possibility of human error in assembly.

Gurau and his students will use a 3D printer to build a pre-prototype before making a full-size metal prototype. PEM fuel cells are used in variety of ways, from portable power sources to automotive uses. They range in power from a few watts to the megawatt scale.

The research team intends to license the technology to a local start-up company.

The Ohio Third Frontier Technology Validation and Start-Up Fund provides grants to projects for building and testing prototypes so that the technology is attractive for licensing and commercialization. They also can be awarded to Ohio start-up companies that license technology developed at Ohio higher education and non-profit institutions. For more information about the Ohio Third Frontier, visit http://thirdfrontier.com.