Graduate students from Kent State University’s Cleveland Urban Design Collaborative, the combined home of the urban design graduate program and the public service activities of the College of Architecture and Environmental Design, won the Excellence in Student Planning Award from the American Planning Association of Ohio (APA-Ohio) on Sept. 27. 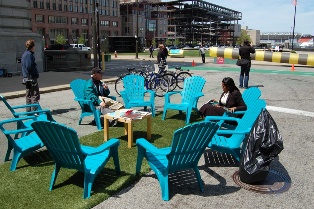 Pop Up Rockwell began as a five-week studio class in the 2012 spring semester. The six graduate students worked to research and implement a temporary, pop-up project in downtown Cleveland after a municipal ordinance was passed requiring complete and green street improvements in the city.

“The idea of this project was to focus on a temporary intervention that would improve the function and physical appearance of a Cleveland street,” Jurca said.

Jurca said the city ordinance was passed in Cleveland, yet citizens were not seeing any real improvements, which is where the Pop Up Rockwell team stepped in.

“We wanted to show city officials and residents what a complete and green street would look like,” Jurca said. “We worked on making a street that was functional for several modes of transportation, including walking, biking, cars and buses. We also focused on green elements like trees plantings and storm water management through biofiltration benches.”

The Pop Up Rockwell project was temporarily implemented on Cleveland’s Rockwell Avenue. Jurca said the positive side of a temporary project like Pop Up Rockwell was that “it could be tweaked and changed on the draft before it is made final.”

This was the first time a student project from Kent State’s Cleveland Urban Design Collaborative graduate program was recognized by APA-Ohio. Every year, students and professionals compete to win awards at an annual conference in several different areas. The trend of Pop Up Rockwell, called tactical urbanism, became popular across the design field in 2012, though Jurca said Kent State’s Cleveland Urban Design Collaborative has been exploring it since 2007 through its Pop Up City initiative.

“Urban design is a newer profession,” Fey said. “To have it be recognized by an established planning association speaks volumes about the future potential for multidiscipline collaborations as a means of making our cities more desirable and successful locales for inhabiting.”

The Pop Up Rockwell project was funded through grants from the George Gund Foundation and Cuyahoga Arts & Culture.

Photo Caption:
The Pop Up Rockwell project included the temporary closure of Cleveland’s E. 3rd Street to vehicular traffic and transformation into a pedestrian plaza for downtown workers, residents and visitors.