In the April 25 issue of Physical Review Letters, Kent State University scientists revealed promising indications of a phase transition never previously observed that may help us better understand the early universe’s transformation and the nuclear matter that makes up 99.973 percent (by weight) of our everyday world. 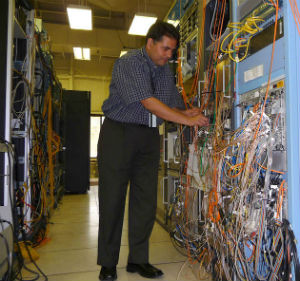 Results from the dissertation of Yadav Pandit, a 2012 Kent State physics Ph.D. graduate, point to a transition in the same mathematical category as the familiar phase changes between ice, liquid water and water vapor.

Pandit and his research colleagues at the Brookhaven National Laboratory in Upton, New York, are trying to understand how the subatomic particles that filled the early universe transformed into the ordinary matter of today’s world. They attempt to recreate matter at the extreme temperatures and densities that existed just after the Big Bang by smashing together ordinary atomic nuclei at the Relativistic Heavy Ion Collider (RHIC).

“When we collide heavy nuclei at the RHIC, we focus on a type of collective motion that measures how the emitted particles deviate from spreading out uniformly in all directions, and this gives important information about the pressure,” said Pandit, now a postdoctoral fellow at the University of Illinois. “Energy that would normally expand the system is instead going into changing the state of matter, and we find a strong dip in pressure that suggests a water-like phase transition.”

The Kent State research group, led by nuclear physics professors Declan Keane and Spiros Margetis, works in collaboration with a large international team, representing more than 50 institutions, and conducts experiments using the RHIC accelerator. Other co-authors of this paper from Kent State include postdoctoral associate Jonathan Bouchet and Ph.D. students Jeremy Alford, Michael Lomnitz, Amilkar Quintero and Prashanth Shanmuganathan, who contributed to the construction and operation of various interdependent subsystems of the Solenoidal Tracker at RHIC (STAR), a large house-sized detector for measurement of the particles that emerge when nuclei collide.

The atom smasher reproduces the “primordial soup” thousands of times per second. Using detectors to track what happens as exotic particles emerge from the trillion-degree collision zone and “freeze out” into more familiar forms of matter, they are learning how the transition takes place.

“In spite of this recent progress, some questions remain unresolved,” Keane said. “Even the latest state-of-the-art models do not agree at a quantitative level with various details of the measurements, an indication that further work remains to be done.”

The accelerator at Brookhaven is being upgraded to allow much enhanced data to be acquired, and more detailed and comprehensive experiments focusing on this phase transition are planned for 2018-2019.
The STAR Collaboration’s full article, “Beam-Energy Dependence of the Directed Flow of Protons, Antiprotons, and Pions in Au+Au Collisions,” published in the journal Physical Review Letters, Volume 112, 162301 (2014) can be found here.