Urbana—In order to examine the workings of the smallest bits of matter, particle physicists smash subatomic particles together at tremendously high speeds and then analyze the resultant sprays (called jets) of even smaller particles, following them through their various decay paths. Huge quantities of data are taken from thousands upon thousands of collisions, the data are analyzed by powerful computers, and the ultimate findings contribute to our understanding of how our world and everything in it works on the most fundamental level. 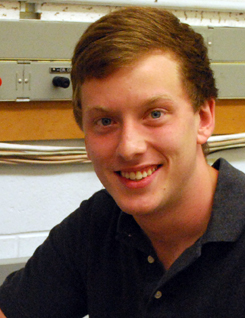 This summer Kent State undergraduate Ben Stickel helped improve analysis software that reconstructs events occurring within proton-antiproton collisions, like those being studied at the Collider Detector at Fermilab in Batavia, Illinois.

Through the National Science Foundation’s 10-week Research Experience for Undergraduates (REU) program, Stickel had the opportunity to conduct research on high energy particle collisions, working side by side with physicist Kevin Pitts at the University of Illinois at Urbana-Champaign.

Stickel worked on the computer analysis of certain events that occurred in proton-antiproton collisions at the Collider Detector at Fermilab. He isolated a constraint within the software that was eliminating a certain type of event within the mass of particles. Lifting the constraint led to excessive background—signals that mimic and hide the signal being searched for. Stickel implemented new constraints such that the background would be reduced while still including the event type that was initially being eliminated.

“The REU program really helped me grow as a high energy researcher,” said Stickel. “I was impressed with the patience and support I received from my advisor as well as the graduate student I worked with, Keith Matera, throughout the learning process.”

The Research Experience for Undergraduates (REU) program of the National Science Foundation supports active research participation by undergraduate students in science, technology, engineering and mathematics. The Department of Physics at the University of Illinois at Urbana-Champaign has hosted annual summer REU student participants since 1993.

Ben Stickel's summer research was funded by NSF Grant No. 1062690. The opinions, results, and conclusions presented are those of the researchers and not necessarily those of the National Science Foundation.

For more information about the Department of Physics at the University of Illinois at Urbana-Champaign, seehttp://physics.illinois.edu/.

For more information about the Department of Physics at Kent State University, see http://www.kent.edu/physics/