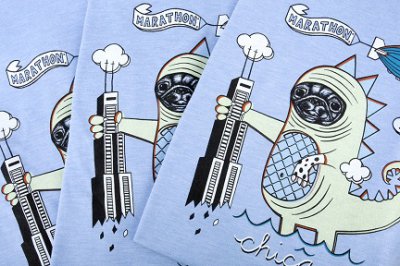 What do a pug, Godzilla and the Sears Tower have in common? Visual Communication Design Associate Professor Jaime Kennedy and his wife Kelly Urquhart are selling “Pugzilla” t-shirts to raise money for the Best Friends Animal Society and the Brian Sirl ALS fund before Kennedy runs the Bank of America Chicago Marathon October 12.

One hundred percent of the proceeds from the Urquhart-designed shirts purchased through the couple’s Etsy shop go toward the charities. Customers can choose which charity they’d like to help through their purchase, or they can choose to split the funds 50-50.“I think the message we want to send out is that everyone should be playing their part,” Kennedy said. “People have skill sets that can make the community better, and they should use them.”

The couple raised “a decent amount” of money for the Best Friends Animal Society, a no-kill shelter, last year through a t-shirt fundraiser before Kennedy ran the Rite Aid Cleveland Marathon. The t-shirts were printed by the Rust Valley Design Co., an organization founded by 2012 VCD alumnus Nate Mucha.

The couple planned to do another fundraiser for the shelter before the 2014 Chicago Marathon when they received news that one of their friends had been diagnosed with Amyotrophic lateral sclerosis (ALS).

“Right before we put the shirts out, we found out our friend Brial Sirl was diagnosed with ALS,” Kennedy said. “ALS has been getting a lot of news recently with the ice bucket challenge, but people rarely see how the disease changes people’s everyday lives. The family has been faced with excessive financial burdens; they have to make some serious home renovations just to get Brian’s wheelchair into the house. This money will go to help Brian Sirl’s family in that way.”

In the future, Kennedy would like to get other VCD students and faculty members involved in the production and design aspect of t-shirt fundraiser.

“I’ve actually talked to several people about that,” Kennedy said. “Getting graphic designers and photographers and illustrators involved in a project like this would be perfect.”

Pugzilla” t-shirts can be purchased for $20 at the Mr. Wiggles Friend Club Etsy shop (named after the couple’s pet pug) until Oct. 12.