Students in the Master of Fine Arts program in the School of Visual Communication Design at Kent State University earned Student Notable Honoree status, placing them in the top six of all national entries, in the Core77 2013 Design Awards for their Healthcare Visuals Kibera project. This is the second award the team has earned last month, with Metropolis magazine naming it runner-up in its Next Generation Design Competition.

Visocky O’Grady connected the students to Justin Ahrens of Rule29 and Life in Abundance, an African-led nonprofit that helps to train, equip and empower local churches to serve the poor. The students spent a semester researching healthcare, literacy and malaria in Kibera, a slum outside Narobi, Kenya. The team developed, tested and refined a set of cards aimed at identifying common symptoms of malaria to aid practitioners in treatment.

The Power of Visual Communication

Eddie Opara, jury captain and partner at Pentagram, the world’s largest independent design consultancy, announced the Core77 Design Awards in the visual communication category via video. He explained, “We’ve been looking for the sense of being dynamic, to a certain degree, experimental, and something with a slight twist.

“It was very rare to find something simplistic and straightforward, and also that was well crafted,” Opara added. “Within these particular notables, such as the Healthcare in Kibera, and the ongoing process work that developed there, it was actually very intriguing and very strong. That was a very good, highlighted piece.”

Relying primarily on images and with minimal text, the campaign highlights the causes and spread of malaria, its common symptoms and treatment options. It also features an array of tools – including board games – to help educate Kibera’s schoolchildren.

“For these entrants, design is no mere stylistic exercise, but an incisive and creative tool that can and must enhance the lives of those whose needs have been ignored,” said Ken Shulman in his article“Aiming High, The Runners-up: A new generation of designers takes on an ambitious set of pressing social changes,” which announced the Next Generation Competition winners.

“We tried to provide visuals that fit within their culture,” said Schwanbeck, one of the team members. “We didn’t want just another Westernized design solution.”

Earlier this year, the students presented the project to local design professionals at a collaborative event by Kent State’s School of Visual Communication Design and AIGA (American Institute of Graphic Arts) Cleveland called Design for Good. Ahrens attended the event to share more of the work he has done in Africa. Read more about the Healthcare Communication project at VCDGrad.com.

The School of Visual Communication Design at Kent State is nationally recognized for outstanding quality in design education, with emphases in visual design, illustration and photo-illustration. The school provides a comprehensive professional preparation, the development of conceptual and aesthetic skills, knowledge of design history and tradition as a basis for individual style, and the transformation of theory into practice through professional example and experience.

The school is a National Association of Schools of Art and Design-accredited program and is a recipient of the Ohio Board of Regents Prestigious Academic Challenges Grant. For more information about Kent State’s School of Visual Communication Design, visit http://vcd.kent.edu. 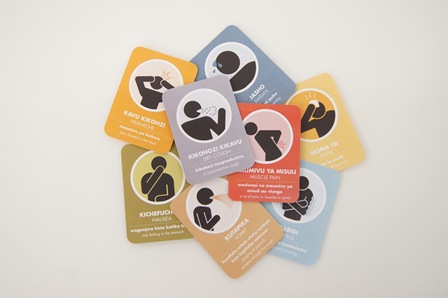