Teleproductions Worth Its Weight in Bronze

Twelve thousand entries, 500 judges and national recognition: Kent State TeleProductions’ work ranked among the best. TeleProductions was honored with three Telly Awards for recent productions. The hard work and talent of TeleProductions crew didn’t go unnoticed by the Silver Telly Council. Productions in three non-broadcast categories: motivational, history/biography and sports, won awards. Staff and members of the student crew collaborated on all three award-winning productions. TeleProductions staff members pride themselves on being a resource for students interested in the field of video production. A student crew is involved in almost every production created by the department, allowing students to gain professional experience while still learning the skills of the trade. “It’s a wonderful experience - being able to watch students grow within the field. These students have been with us for a long time, so it’s fun watching their skills progress with each and every production,” Mark Warzinski, Production Manager, said.

Creating Productions for a Cause

Two of the award-winning productions were created for the Margaret Clark Morgan Foundation, a local organization that works to “improve the lives of people with serious mental illness by investing in innovative projects in Northeast Ohio having a national transformational impact,” according towww.mcmfdn.org. TeleProductions has worked with the MCM Foundation for the past five years producing various videos for awards and recognition ceremonies. “The videos are critical to our Impact Awards recognition program. They highlight local, regional and national leaders and partners pursuing the Foundations mission. Each video is unique in its ability conveying the passion and excellent work of our partners,” Rick Kellar, President of the Margaret Clark Morgan Foundation, said. Senior electronic media major Andres Kisimoto-Taba worked alongside Media Specialist Shane Roach for the Margaret Clark Morgan Foundation productions. Both videos told stories of organizations working to assist a demographic in need, with the Smart Summer Camp assisting with academic opportunities and Clara Rankin working to better the lives of those facing mental illness. “We were able to achieve different styles for every location we went to. We had different activities and locations we had to cover so we really had to think on our feet when we were recording video,” Kisimoto-Taba said.

TeleProductions’ team entrance video for the Kent State Men’s Basketball Team was also honored with a bronze Telly. Behind-the-scenes of the award-winning Men’s Basketball Team Entrance Video were two Kent State Students: senior electronic media major Mike Donelan and junior electronic media major Dante Gramuglia. Both students have been with TeleProductions since their first year at Kent State and their hard work has now been recognized by the prestigious Silver Telly Council. “The video that was submitted was two different ones that I married together for award submission,” Donelan said. “The first half played prior to when the team’s starting lineups were announced. The second half played right before tip off.” The video was created through collaboration with the men’s basketball team, who Donelan said was very cooperative in helping TeleProductions create their vision. “I just love the way it came together. A lot of the time when we have ideas its hard to put what is on our heads on the computer screen, but I think Mike did an awesome job of laying out the design of the logo in [editing software] and it came out just how we pictured,” Gramuglia said. 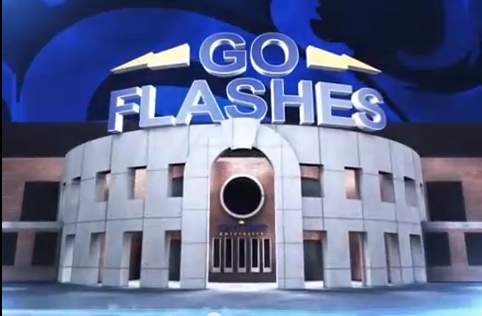 The Telly Awards are one of the most prestigious awards for local, regional and national video productions, films and commercials. According to the Telly Award’s website, each year more than 12,000 entries are submitted for judging from all 50 states and five continents. Silver and bronze Telly Awards are given to productions that meet requirements based on a high standard of merit. While entries do not compete against each other, judges have specific criteria they look for in award-winners. More than 500 industry professionals, all previous Telly Award winners, judge all entries.