The day included presentations from several area conservation experts, as well as judging of student papers and posters.

Speakers included Jim Kerr, from Beaver Creek State Park Education Center, and Tom Butch, a Columbiana County Parks commissioner, who spoke about the dangers of the creek water becoming too low and endangering wildlife if the Ohio Department of Natural Resources allows fracking companies to remove too much water from the creek.

Kerr noted that water samples will be taken from the creek to determine if the pH balance is being maintained. He is looking for volunteers to help with the testing process. Anyone who is interested in helping with the water testing or with other aspects of Beaver Creek State Park is urged to contact him at the Beaver Creek State Park Nature Education Center.

Kerr and Butch also discussed the cleanup of the pesticide mirex which has been moving down the creek from a source just north of Salem since the late 1960s and the early 1970s. Kerr noted that sediment containing mirex will be removed from the creek and buried at the Nease Chemical site in Salem where the problem initiated, along with sediment from that site. Remediation began, but has not yet reached Beaver Creek State Park.

Cassandra Clevenger and Stephanie Deibel, senior conservation biology students from the Kent State campus spoke about examining and cataloging the benefits of the urban forest. Clevenger and Deibel reported that the urban forest benefits cities because it contains water run-off and also helps  reduce global warming because of production of oxygen and intake of carbon dioxide. They will  present this information at two national conferences later this year.

The trees presented to conference attendees took on added significance for many because of Clevenger’s and Deibel’s presentation.

Clevenger began her biology career at the East Liverpool campus where she said that her interest in conservation biology increased because of Dr. Roxanne Burns who, personally and with the Environmental Club at the East Liverpool campus, works on community issues such as tree planting at local parks and clean-up days every spring and summer at the Broadway Wharf and in other areas of the city.

Elizabeth Kline, a professor at Zane State College, spoke to the group about her classes that partnered with the conservation area The Wilds, near New Concord, Ohio. Students took samples and tested water on the grounds of The Wilds before fracking began to provide a baseline for testing after fracking. Kline spoke about the students’ hands-on experience and its benefits to them when entering the workplace. 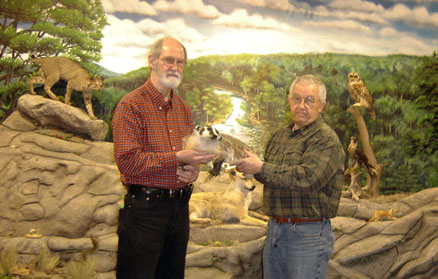 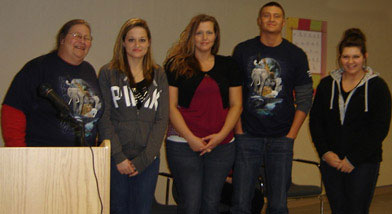