The Kent State Salem Communiversity Choir filled the City Center auditorium with music that helped put the audience members in a “Merry Mood” for the holidays during its annual concert.

The choir is directed by Assistant Professor Mel Fucci and its members represent the local community, Kent Salem students and faculty. 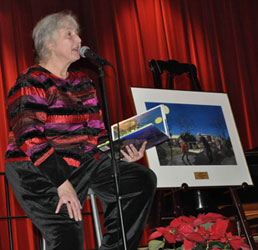 This year’s event was held in conjunction with grand re-opening of the The Creative Learning Center: Salem Storybook Museum Re-Created, which is located on the first floor of the City Center.

During the program, Ginger Grilli of the Storybook Museum read the children's book Night Tree, which was written by Eve Bunting and illustrated by Ted Rand. An original illustration from the book is part of the museum’s collection and was featured during the reading.

The Communiversity Choir will regroup next semester to prepare for its annual spring concert. The choir practices on Tuesday evenings at the City Center and anyone interested in joining can contact Fucci at mfucci@kent.edu to learn details.