Justice Judith French to present ‘My Journey to the Supreme Court'

Ohio Supreme Court Justice Judith French will present ‘My Journey to the Supreme Court’ on Wednesday, Sept. 25, at 7p.m. in the Blair Memorial Library, located in the main building of Kent State University at East Liverpool. This free talk is sponsored by the Alliance for Better Living in East Liverpool (ABLE) and is open to the public.

Prior to her appointment, French served at the Tenth District Court of Appeals, which hears appeals from Franklin County courts and state administrative agencies. She was elected to the appellate court in November 2004 and served until her appointment.

Before becoming a judge, French served as chief legal counsel to Gov.  Bob Taft. Dedicated to public service, she also served as an assistant attorney general and as chief counsel in the office of Attorney General Betty Montgomery from 1997 to 2002. While there, she argued twice in the United States Supreme Court. Most recently, French argued on behalf of the state in the Cleveland school vouchers case.

She began her state service in 1993 as deputy director for legal affairs at the Ohio Environmental Protection Agency. She was also an associate counsel at Steelcase Inc. in Grand Rapids, Mich., and an associate at the Columbus law firm of Porter, Wright, Morris & Arthur, where she practiced environmental law.

French earned a bachelor’s degree in political science, a masters in history (military history and strategic  studies), and her juris doctorate degree (with honors), all from The Ohio State University. She currently serves as a member of the Moritz College of Law National Council.

French grew up in Sebring, and was a mentor and tutor in the Columbus public schools. She resides in Grandview Heights with her husband, Ed Skeens, who is a magistrate in the Franklin County Common Pleas Court, and two children, Julia and Joseph. 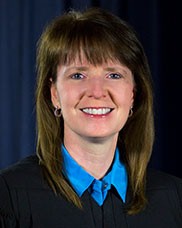