Dr. Graham addressed Kent State East Liverpool graduates telling them to focus on the importance of learning and using one's time wisely. "Realize our time on this earth is limited.  All of you have shown that you already know this by the fact that you are graduating this evening," Graham said.  "You have used your time wisely, and I would advise you to never forget that. By being here tonight you have already demonstrated that you have the ability and the determination to overcome struggles and adversity," he said.

He congratulated the students on their success, wished them good luck on their life's journey, and encouraged them to give back to their local community.

At Kent State Salem, Dr. Figg quoted nineteenth-century teacher and lecturer Ralph Waldo Emerson by stating "We are always getting ready to live, but never living." Figg challenged graduates to live in the current moment and seize the opportunities that are new every day.  She congratulated the students on their academic successes and encouraged them to avoid pressures of following the crowd, to make their own way, think critically and to do good to others and to themselves.

"We all had the same goal. We all wanted to better ourselves didn't we? We all wanted to learn. So I ask you, am I really a non-traditional student just because I am not recently out of high school?" O' Wesney asked.  "Some of us spent our evenings and weekends running to and from our children's sports practices, tournaments, concerts, paying bills, and keeping a house running during our college years, but we are no different than every traditional student out there.

At Kent State East Liverpool, mother and daughter team Dena Bentz and Katie Parr were thrilled to celebrate the completion of their bachelor degrees in criminology and justice studies together.

"Kent State East Liverpool really made it possible for me to earn a college degree," Bentz said. "I learned a great deal in my field of study, but was also challenged to make a difference in the community."

Her daughter added, "I know my experiences at Kent State Liverpool have prepared me for law school, and I am proud to now officially be a Kent State University graduate," Parr said. 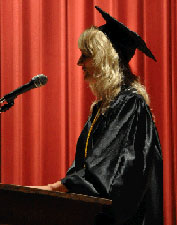