Adkins and Clark will be recognized at the 27th Annual Wall of Fame dinner on May 1 at the East Liverpool Country Club. Tickets are on sale now for the event and must be ordered online through the campus website at https://commerce.cashnet.com/WOF. For more information about ordering tickets, call 330-382-7416.

Adkins is being honored with the Lifetime Achievement Award, based on his extensive experience in education and ministry. He currently serves as the superintendent of the Columbiana County Career and Technical Center, a position he has held since 2011.

Adkins began teaching at the Geauga Christian School in 1978, but returned to his roots to teach at East Liverpool Middle School from 1979-89, where he also coached girls volleyball and basketball.

He served as an assistant principal at the CCCTC from 1989-90, and served in various principal positions in the Beaver Local School District, beginning in 1990. He was the BLSD superintendent for seven years before retiring.

He is a member of the Calcutta Rotary Club; the Ohio Association of Career Technical Superintendents; the Area 17 Workforce and Investment Board; the Easter Ohio Educational Partnership Board; the Mahoning Valley Manufacturers Coalition; the United Methodist Committee on District Superintendency; and formerly served on the Calcutta Area Chamber of Commerce; Riverview Cemetery Board and the Buckeye Association of Administrators.

Adkins and his wife, Darla, have two children, Sarah and Luke. His parents are the late Willard and Louise Adkins. 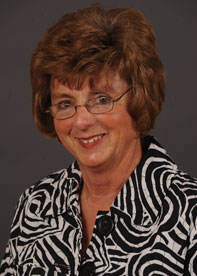 Clark is the 2015 recipient of the Friend of the Campus Award, recognizing her years of dedicated work at the Kent State East Liverpool Campus. The award was established to honor a person who served as a long-term advocate for increasing higher education access to area residents.

Clark was employed on the East Liverpool Campus for 35 years, beginning as a clerk/typist and advancing to being a word processor, secretary and, eventually, senior secretary.  A 1961 graduate of East Liverpool High School, she also graduated from the Humboldt Airline and Business Institute and attended Kent State East Liverpool.

As an employee, Clark served on several search committees for various campus positions. She also served as secretary and vice-chair of the original Ohio River Regional Arts Guild.

On campus, Clark was best known for her tireless work related to the annual Wall of Fame banquet and awards program. She was part of the planning for this event from its inception, and worked year round to raise funds by selling hot dogs at Giant Eagle and pop in the faculty lounge.

Since retiring, Clark enjoys traveling, boating, reading and doing word puzzles. She and her husband have two daughters, four grandchildren, one great-grandchild and another due this month.