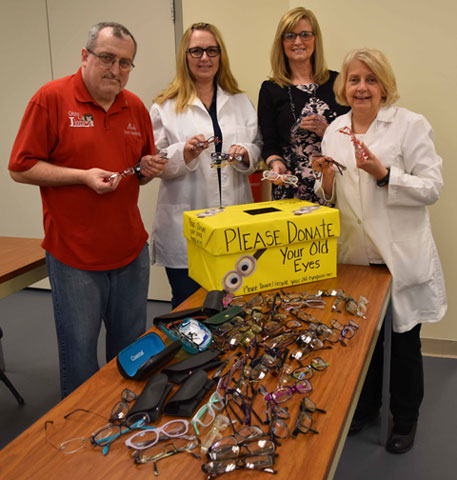 Faculty and staff members from Kent State East Liverpool’s nursing program collected more than 100 pairs of used eye glasses that were donated to the East Liverpool Lions Club for its Recycle for Sight program.

The drive was held throughout March, with students, staff and faculty members from the campus donating glasses and cases, including several pairs of children’s glasses

According to Marcie Van Fosson, clerical specialist in the associate degree in nursing program at Kent State East Liverpool, the faculty and staff were inspired by the story of how Helen Keller attended the Lions Club International Convention in 1925 and challenged the organization to become “knights of the blind in the crusade against darkness.” The Lions accepted her challenge and created a program aimed at helping prevent blindness.

Bob Allgood, a custodian at Kent State East Liverpool and immediate past district governor of the Lions Club, explained that the glasses will be delivered to a regional Lions Eyeglass Recycling Center (LERC), where volunteers clean, sort and package the eyewear before being sent to regions where individuals do not have routine access to eye exams and/or corrective eye glasses.

“It is amazing that so many glasses were collected in so little time,” Allgood said. “Each pair will make a huge difference in someone’s life. As a Kent State employee, I am proud of how my co-workers supported this project and how they care for others. As a member of the Lions Club, I am very thankful for the collected glasses.”

PHOTO: Shown with the glasses that were collected on the Kent State East Liverpool Campus for the Lions Club are (from left) Bob Allgood; nursing student Colleen Herbert; Marcie VanFosson and Janet Peterson, coordinator of the nursing skills lab.