A ribbon-cutting ceremony was held Sept. 26 to mark the official opening of the Seasoned Market on the East Liverpool Campus. 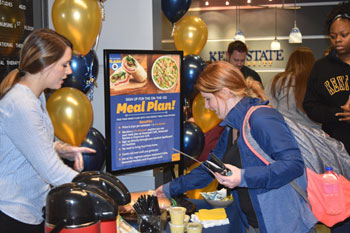 Located on the second floor of Purinton Hall, the Seasoned Market provides on-site food options for students and employees such as soups, sandwiches, salads, snacks and hot and cold beverages.

Although the space was open and ready at the beginning of the fall semester, the “grand opening” was an opportunity to showcase the space and thank all who were involved with making it possible. 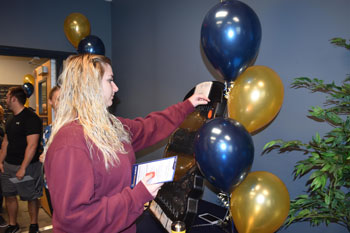 “There was a lot – and I mean a lot – of planning and work that went into making this Seasoned Market possible,” noted David Dees, dean and chief administrative officer of the Columbiana County campuses. “It all started a couple of years ago when Bev Warren (Kent State’s president) listened to our students and staff as they talked about having food on campus during one of her visits here. She heard you! Her goal is to make Kent State the healthiest university in the country and this is one way to help make that happen. She wants students and employees to have convenient, healthy food options while they are on campus.”

While the Seasoned Market is housed in Purinton Hall, it is managed and staffed by Aramark, the Kent State food vendor.

Photo Caption B: Sampling the food